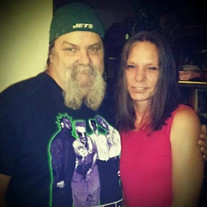 Clyde Arthur Kirby, son of Dorothy Jane (Mayberry) and Clyde Northrup Kirby was born on April 24, 1965, in Ventura, California, where he spent his childhood and later graduated from Frontier High School. He worked at the Naval Base in Port Hueneme and at several restaurants throughout the years. He was a jokester at heart. He loved sports and was a dedicated Jets fan. He enjoyed rock music. More than anything he was a proud husband, father, and grandfather. Clyde was preceded in death by his parents, brother Randy, and several sisters. Crystal Dawn Kirby, daughter of Ronald James Erb and Delores Ann (Moore) Erb was born on August 5, 1964 in Philadelphia, Pennsylvania. She moved to California as a child and graduated from Frontier High School where she first met Clyde. Crystal worked at Richland Care Center as a cook. She was a free spirit who found joy in the simple things such as her yearly camping trips. She loved Marvel Comics, Coca Cola, and adored her cats, Misfit and Psyche. Crystal was preceded in death by her parents, two brothers Ronnie and Mark, two sisters Victoria and Florence. Clyde and Crystal met while attending Frontier High School as teenagers. They fell in love and knew they were soul mates. They made their way to Missouri, married in Waynesville, and had celebrated their 37th anniversary together on April 3rd. Just as Clyde and Crystal lived life together, they left this world together at home on Thursday, May 7, 2020. Both having attained the ages of 55 years. They will be forever missed by their family and all those who knew and loved them. They leave to cherish their memory their children and grandchildren, Anthony Kirby and his wife, Misty, daughters, Sophia and Zoey of Crocker, MO, Keira Williams, and children, Kaitlyn, James, Marshall and Jacob of Richland, MO, and Brandon Kirby of Jefferson City, MO; numerous brothers, sisters, and a host of other relatives and friend Memorial contributions may be left in memory of Clyde and Crystal Kirby and can be left at the Memorial Chapel of Richland. Online condolences may be left at www.memorialchapelsandcrematory.com

Clyde Arthur Kirby, son of Dorothy Jane (Mayberry) and Clyde Northrup Kirby was born on April 24, 1965, in Ventura, California, where he spent his childhood and later graduated from Frontier High School. He worked at the Naval Base in Port... View Obituary & Service Information

The family of Crystal Dawn (Erb) Kirby created this Life Tributes page to make it easy to share your memories.