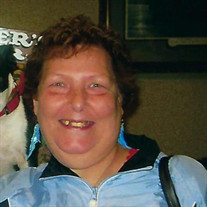 Crystal Sharlene Jackson, daughter of Raymond and Isabelle (Laufflin) Sova, was born September 21, 1945 in Sikeston, Missouri. She passed away Monday, July 20, 2020 in her home in Waynesville, Missouri having attained the age of 74 years. As a young girl, Crystal grew up and attended school in Fenton, Michigan. After graduating from high school, she entered the United States Army and served her country faithfully until her honorable discharge in 1965. She had attained the rank of Private First Class. On October 31, 1964, Crystal was united in marriage to Thomas Russell Jackson in San Antonio, Texas. They shared over 43 years of marriage together and were blessed with three children: Michael, Dwane and Bonnie. Thomas preceded Crystal in death on October 16, 2008. After her honorable discharge from the military, Crystal worked for a time at the military hospital, but for the most part, she was able to stay at home and raise her children. In her spare time, Crystal enjoyed reading and doing handwork, especially embroidery and crocheting. She was an avid collector of Beanie Babies, salt & pepper shakers, dog figurines, particularly Cocker Spaniels and horse figurines. Crystal loved her family dearly and she will be sadly missed, but fondly remembered by all those that knew and loved her. She leaves to cherish her memory, her three children: Michael and Dwane Jackson, both of Waynesville, MO and Bonnie Smith and husband Robert of Trinity, NC; two grandchildren: Robert Smith II and Shiann Smith; one brother: Douglas Sova of Dixon, MO; one sister: Bridget Booth of Dixon, MO; other relatives and friends. In addition to her parents and husband, Crystal was preceded in death by one brother: Robert Raymond Sova (1997). Services were held at 1:00 p.m. Wednesday, July 29, 2020 in the Memorial Chapels and Crematory of Waynesville with Chaplain Vance Awa officiating. The songs “One Day at a Time”, “I Will Always Love You” and “Burning Bridges” were played. Serving as escorts were family and friends. Burial with military honors followed in the Waynesville Memorial Park Cemetery of Waynesville. Military honors were provided by Missouri Honors Team.

Crystal Sharlene Jackson, daughter of Raymond and Isabelle (Laufflin) Sova, was born September 21, 1945 in Sikeston, Missouri. She passed away Monday, July 20, 2020 in her home in Waynesville, Missouri having attained the age of 74 years.... View Obituary & Service Information

The family of Crystal Sharlene Jackson created this Life Tributes page to make it easy to share your memories.