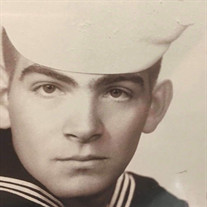 Roy Henson was born on July 11th, 1943 in Richland, MO. Roy was the 2nd of 6 children born to Warren and Dorothy Henson. Roy spent his childhood years growing up in Stoutland, MO where he still has many friends and family. He enlisted in the U.S. Navy in August, 1960 one month after his 17th birthday. This was the summer before his senior year. He received his GED and completed 2 years of college credits while in the Navy. Roy served in the US Navy from his enlistment in 1960 until his retirement in 1983. During his career he spent much of his time at sea, racking up an impressive list of ships on which he served. After recruit training in San Diego, CA he reported aboard the USS Caliente where an older boatswain’s mate took the young boy under his wing and taught him everything he knew about the rate. Roy flourished under the tutelage of the senior seaman who was a hard task master, but one that held a very esteemed spot in Roy’s memory and heart. Years later, Roy followed suit by becoming a hard but caring taskmaster who readily shard his knowledge with the younger deckhands. A decorated Vietnam War veteran, Roy had an illustrious career. During his service he had the honor of being a plank holder on two different ships. He was also responsible for a detachment of amphibious Seabees deployed to the Mediterranean Sea. In 1975, Roy was selected Sailor of the Year for the Fleet Maintenance Assistance Group Naval Base Norfolk, VA. He was commended for his, “outstanding performance of duty, leadership, initiative, military appearance and example to fellow Navy men.” Achieving the rate of CWO-3, Roy spent his remaining time in service at COMTRALANT- Norfolk, VA overseeing all amphibious warfare training on the East coast until his retirement on August 31, 1983. It’s safe to say that the only thing Roy loved more than the Navy was his family. Roy is preceded in death by his parents, Warren and Dorothy (Kuykendoll) Henson, 2 brothers: Robert and Claye Henson; 1 sister: Evelyn Phillips; 1 daughter: Tracy Ceretto. Roy passed away on the morning of April 25, 2019 in Richland, MO, and leaves to mourn his passing: his beloved wife Lois (married April 25th, 2004), 5 children: Jody Henson of Industry, PA, Lonny Henson (Laurie) of Tavares, FL, Terry Henson of Aumsville, OR, Lacy Powell (Daniel) of Philadelphia, PA and Cody Henson (Katie) of Richland, MO; 12 grandchildren, numerous great-grandchildren; 1 sister: Dorothy Raye Wells (Gene) of Stoutland, MO; 1 brother: Rick Henson (Ellen) of Stoutland, MO; several nieces, nephews, other relatives, and many friends. Roy’s family and friends will miss his humor, intellect, and candor. Through our tears, let us see the blessings of knowing and loving Roy – a great and noble man. A celebration of life service was held at 1:30 p.m., Friday, May 03, 2019 in the Memorial Chapel of Richland with Roy’s dear friend, Jerry Mouton officiating. Interment with Full Military Honors followed at 3:00 p.m., in the Missouri Veterans Cemetery of Waynesville with the Navy Chaplain officiating. Services were under the direction of Memorial Chapel of Richland. Memorial contributions may be made in memory of Roy Dean Henson and may be left at the Memorial Chapel of Richland. Online condolences may be sent to www.memorialchapelsandcrematory.com

Roy Henson was born on July 11th, 1943 in Richland, MO. Roy was the 2nd of 6 children born to Warren and Dorothy Henson. Roy spent his childhood years growing up in Stoutland, MO where he still has many friends and family. He enlisted in the... View Obituary & Service Information

The family of CWO-3 (Ret) Roy Dean Henson created this Life Tributes page to make it easy to share your memories.