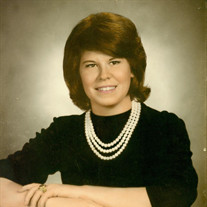 Cynthia Jean Marion, daughter of the late Murrell D. McClanahan and Lillian M. (Thomas) McClanahan, was born July 5, 1947 in Bonne Terre, Missouri. Cynthia grew up in the St. Louis, Missouri area and graduated from high school. On February 17, 1968, Cynthia was united in marriage to Michael Gail Marion in Flat River, Missouri. They shared over 48 years of marriage together and three children: Tracey, Marty and Brook. Cynthia had various jobs; from making wallets to being a telephone operator. But her most important job and the one she is most known for was being the best mother and wife she could be. Most of all, she was a strong, loving, and supportive military wife. When Cynthia was younger, her favorite pastime was being a majorette. She had many pictures of her and her baton. Other times, she was crafty and loved relaxing by crocheting and she was very poetic. Cynthia was very civic minded and served as a Girl Scout and Boy Scout leader and did other volunteer jobs for the military. Cynthia passed away Monday, August 8, 2016 in the Mercy Hospital of Springfield, Missouri having attained the age of sixty-nine years, one month and three days. She will be sadly missed, but fondly remembered by all those that knew and loved her. She leaves to cherish her memory, her husband: Michael Marion of Waynesville, MO; one daughter: Tracey Zielinski (Thomas) of Waynesville, MO; two sons: Marty Marion (Charise) of Waynesville, MO and Brook Marion (Juana) of Granite City, IL; nine grandchildren; five great grandchildren and two on the way; other relatives and friends. In addition to her parents, Cynthia was preceded in death by one brother, Mark McClanahan. Services were held at 1:00 p.m. Friday, August 12, 2016 in the Memorial Chapels and Crematory of Waynesville / St. Robert with Bishop James Powell officiating. The songs” How Great Thou Art”, “Amazing Grace”, “Wind Beneath My Wings” and “From A Distance” were played. Serving as escorts were Marty Marion, Brook Marion, Thomas Zielinski, Andrew Zielinski, Zakk Marion, Barry Acklin, Sammy Scott and Austin Zielinski. Burial followed in the Missouri Veterans Cemetery of Waynesville, Missouri. Memorial contributions may be made in memory of Cynthia Marion and may be left at the funeral home.

The family of Cynthia Jean Marion created this Life Tributes page to make it easy to share your memories.