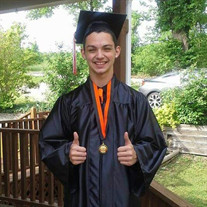 Dale Frank Lee Davis, Jr., son of Dale Richard Davis and Moronica Beatrice (Ghumm) Davis, was born December 1, 1995 in the Lake Ozark Regional Health Center of Osage Beach, Missouri. He passed away Sunday, June 19, 2016 in St. Robert, Missouri having attained the age of 20 years, 6 months and 18 days. Dale grew up in the Waynesville / St. Robert area and graduated from Waynesville High School. He worked as a driver for China Buffet, served at Subway and also did odd jobs. He was a member of the Onekru Car Club. Dale loved his family and was always about taking care of them. He wanted to join the military just so he could take care of the family and help put his sister through college by using his GI bill. He was always putting himself last to take care of others first. His friends were also a huge part of his family and he was always looking out for them. He would give his last dollar or run his tank out of gas to help someone else. Dale had an infectious smile and laugh that he used to cheer people up and make them laugh. He would even dance silly and embarrass himself just to make people laugh. He would stand up for others but he would never standup for himself. He had a heart of gold and many times would be awakened in the night by a friend who was having problems and he would console them and make them smile. He always kept communication open with all of his loved ones. Dale was always determined when he wanted to learn anything. He loved going to the Zone and do some skating. He enjoyed skateboarding, playing basketball when anyone asked, racing his car, and music. He was a very competitive person. He enjoyed gaming and kicking back with his friends. He was an animal lover and loved taking care of his pets. His family came first and he loved them tremendously. He would check on his grandmother due to her health issues to make sure that she was ok or if she needed anything. They were two peas in a pod. Dale had a way of making a good impression on everyone who he ever came in contact with. People fell in love with him and he had the best personality. His laugh, smile, love, hugs, honesty, being a dork, dancing, goofiness was infectious to all. Dale was the perfect son, brother, nephew, grandchild, cousin and friend anyone could ever ask for. He had so many great qualities and he will be sadly missed by all those that knew and loved him. Dale leaves to cherish his memory, his mother Moronica Davis and one sister Jasmine Morris both of Kaiser, MO; grandmother Arlene Ghumm of Waynesville, Mo; two aunts: Nicole Ghumm of Waynesville, MO and Beth Morris of St. Robert, MO; one uncle Ashley Ghumm of Brumley, MO; other relatives and friends. Services were held at 4:00 p.m. Sunday, June 26, 2016 in the Memorial Chapels and Crematory of Waynesville / St. Robert with Pastor Christopher Hendrix officiating. Several friends and family members recalled their wonderful memories of Dale. The songs “See You Again” by Wiz Khalifa, “One Sweet Day” by Mariah Carey, “I’ll Be Missing You” by Puff Daddy and “Rest in Peace, Dale” written for Dale by his friend, YoungCyrus. Memorial contributions may be made in memory of Dale Davis, Jr. and may be left at the funeral home.

The family of Dale Frank Lee Davis, Jr. created this Life Tributes page to make it easy to share your memories.