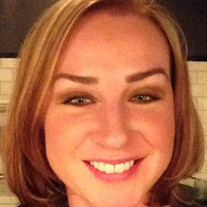 Dallas Kay (McCamon) Reed was born July 24, 1980 to R John McCamon and Margaret (Davidson) Shoffner in Plano, Texas. Dallas passed away May 17, 2017, in Dunnellon, Florida at the age of 36 years. Dallas was a beautiful blue-eyed blonde haired child, born and raised, went through college, married and started her business career in the Dallas, Texas area. Dallas accepted Jesus as her Lord and Savior, making a public profession of faith and was baptized at 8 years of age. Dallas was a member of Prestonwood Baptist Church, Plano, Texas. Dallas started ice skating at the age of 3 and competitive skating at the age of 6, competing with her drill team in her teenage years in state and regional USA competition, winning gold in every competition except for one silver medal. Dallas later went on to become a professional ice skating instructor. Dallas had many artistic skills including being an exceptional writer, winning 1st place in a regional USA WRITING competition in Irving, Texas judged by several famous and distinguished authors in the USA. Her winning book, totally written and illustrated by Dallas K. McCamon at age 12…Little Miss Sarah Beth was an exceptional children’s book. Dallas’s professional career started in Dallas, Texas later moving to Phoenix, Arizona, and then the San Francisco, California area, returning to Dallas, Texas she was diagnosed with type 1 diabetes, later transferring to Florida in the last year of her young life. Dallas is survived by her parents, R John McCamon of Texas and Margaret (Davidson) Shoffner of Arizona; siblings: (Fred) and Shirley Krause (NY), Barry and (Susie) McBride (FL), Sandra McBride (FL), Sherry Owens (AZ), several nieces and nephews, numerous aunts, uncles, cousins and many, many friends. Dallas was preceded in death by her paternal grandparents Robert and Rose (Elam) McCamon, maternal grandparents Shirley and Rosemary (Isdell) Davidson; Uncles Dick and David Davidson, a special Uncle Bill Crossland, whom she called “Grandpa”, nephew, Shawn Dunnem and stepfather Don Shoffner. Dallas was deeply loved and will be missed by all who knew her. Her life on earth was short but her heavenly life will be eternal. In lieu of flowers, donations can be made in memory of Dallas to the American Diabetes Association or the SPCA (non-kill animal shelter). A celebration of life service was held Friday, June 2, 2017, in the Memorial Chapel of Richland with Pastor Christopher Hendrix officiating. R. John McCamon shared touching memories of his daughter, Dallas. Laura Elam-Schoephorster & David Elam were accompanied by Marleen Brown as they sang, “For Those Tears I Died”; other recorded music included, “Master of the Wind” by Candy Hemphill Christmas and “Look for Me” by Jimmy Swaggert. Inurnment followed in the Oaklawn Cemetery of Richland, Missouri. Services were under the direction of Memorial Chapel of Richland. Memorial contributions may be made in memory of Dallas to the American Diabetes Association or the SPCA (non-kill animal shelter) and may be left at the funeral home.

The family of Dallas Kay McCamon - Reed created this Life Tributes page to make it easy to share your memories.