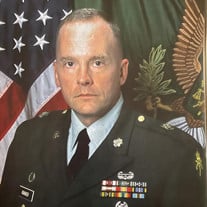 Daniel Bentley “Dan” Rimmer, son of the late William Arthur Rimmer and Odrie Martha (Bentley) Rimmer, was born February 8, 1956, in Springville, New York. As a young boy, he grew up and attended school in Batavia, New York where he graduated from Batavia High School. He furthered his education at Genessee Community College and in later years earned his Bachelor and Master’s Degree. In 1975, Dan entered the United States Army and served his country faithfully until his retirement in 2002 after 27 years of faithful service. During his time in the Army, he earned several awards and commendations; some of which included: Legion of Merit, Meritorious Service Medal (5th Award), Army Commendation Medal (5th Award), Army Achievement Medal (6th Award), Army Good Conduct Medal (8th Award), National Defense Service Medal, Noncommissioned Officer’s Professional Development Ribbon with Numeral 4, Army Service Ribbon, Overseas Service Ribbon (6th Award), Expert Marksmanship Qualification Badge with Rifle Bar, Air Assault Badge, and Drill Sergeant Identification Badge. He had earned the rank of Regimental Command Sergeant Major by the end of his prestigious career. During his military career, Dan was a two-time winner of the Association of the United States Army Leadership Award and served three separate times as a Company First Sergeant. His leadership positions included First Sergeant of the Sergeants Major Academy; Command Sergeant Major, 716th Military Police Battalion; Command Sergeant Major, 709th Military Police Battalion; Command Sergeant Major, 14th Military Police Brigade; and the 7th Regimental Command Sergeant Major. As the 14th Military Police Brigade Command Sergeant Major, he directly oversaw the transition to and integration of training at the new home of the Regiment at Fort Leonard Wood, Missouri. While Dan served in the military, he was stationed at several different areas around the world and one of those stations was Korea. While there, he met the love of his life, Ok Nan Lee. They were united in marriage on November 5, 1979, in Seoul, Korea. They shared over 42 years of marriage together, and were blessed with two daughters, Angela and Barbara. In his spare time, Dan enjoyed anything that had to do with racing and cars. He was an avid MOPAR racing enthusiast and also enjoyed taking his prized 2010 Dodge Challenger and 1965 Plymouth Barracuda to various car shows. Dan loved his family tremendously and took great pride in making sure their needs were met. He treasured the times that they could spend together, especially with the grandchildren. Dan passed away Wednesday, March 30, 2022, in his home having attained the age of 66 years after a courageous battle with cancer. He leaves to cherish his memory, his wife: Lee Rimmer of the home; two children: Angela Rimmer (Rick Lingerfelt) of Atlanta, GA, and Barbara Santone (Lacey) of Kissimmee, FL; two grandchildren: Gabriel and Victor; three brothers: Michael Rimmer (Marge) of Batavia, NY, Jon Rimmer of Batavia, NY, and William Rimmer of the state of Florida; several other relatives and friends. In addition to his parents, Dan was preceded in death by one sister-in-law: Martha (Shepherd) Rimmer. As stated in an article published by Fort Leonard Wood, “CSM Rimmer will not only be remembered for his steadfastness and commitment to excellence, but in the legacy of the training programs he set in place throughout his career.” He will also be remembered for his caring and loving spirit for his family. Funeral services were held at 12:00 p.m. Wednesday, April 6, 2022 in the Memorial Chapels and Crematory of Waynesville / St. Robert with Chaplain (MAJ) Travis Hairston officiating. The songs "Misty Blue" by Dorothy Moore, "The Dance" by Garth Brooks" and "Forever & Ever, Amen" by Randy Travis were played. Serving as escorts were the United States Army of Fort Leonard Wood, Missouri. Burial with military honors followed in the Missouri Veterans Cemetery of Waynesville. Military honors were provided by the United States Army of Fort Leonard Wood, Missouri. Memorial contributions may be made in memory of RCSM (Ret) Rimmer and may be left at Memorial Chapels and Crematory of Waynesville / St. Robert.

The family of RCSM (Ret) Daniel Bentley "Dan" Rimmer created this Life Tributes page to make it easy to share your memories.