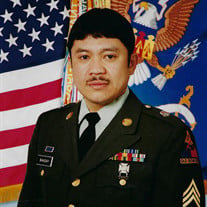 SFC (Ret) Danilo M. Banday, son of Domingo Banday and Crispina (Madalipay) Banday Yasay, was born July 23, 1954 in Nueva Vizcaya, Philippines where he grew up and graduated from St. Catherine High School in Bambang. He continued his education by attending the University of the Philippines Los Baños and earned his degree in forestry. In 1976, Danilo immigrated to the United States. The following year, Danilo entered the United States Army and served his country faithfully until his retirement in September 1998. He attained the rank of Sergeant First Class and earned several awards and commendations for his faithful service; some of which include: Army Commendation Medal (1st Oak Leaf Cluster), Army Achievement Medal (3rd Oak Leaf Cluster), Good Conduct Medal (7th Award), National Defense Service Medal, Southwest Asia Service Medal w/3 Bronze Service Stars, NCO Professional Development Ribbon w/Numeral 3, Army Service Ribbon, Overseas Service Ribbon w/Numeral 4, Expert Marksmanship Badge (Rifle M-16), Driver and Mechanic Badge (Driver-W Bar), and the Kuwait Liberation Medal. He was deployed to the Middle East during the Persian Gulf War. While visiting his family in Hawaii on leave from his duty station in North Carolina, Danilo met the love of his life, Myrna B. Coloma. They were united in marriage on May 16, 1981 in Honolulu, Hawaii. Danilo and Myrna shared over 37 years of marriage together and were blessed with two children: Jennifer (1982) and Danny (1983). Military service brought Danilo and his family from Hawaii to Virginia, Texas, and Germany twice. During their time in Texas, Danilo enjoyed taking the family camping, fishing and crabbing on the coast. While stationed abroad, Danilo made sure to take frequent vacations and long weekends with his family. The family explored sites around Europe, including many German castles and towns, the windmills in Holland, the countryside in Italy, the markets in Prague and the salt mines in Austria. Danilo’s final duty station was Fort Leonard Wood, Missouri, where he retired in September 1998. The following year he joined EDP Enterprises as a cook, then was quickly promoted to Building Manager. Danilo was with EDP for 19 years. During his spare time, Danilo loved being outdoors fishing and caring for his many animals, including dogs, chickens, ducks, quails and a goat. He was an avid collector of firearms, vintage signage, tools, owl figurines, hats and an eclectic mix of many other things. He recently completed a long-term project: a bar customized with hundreds of pieces from his collections. Most importantly, he loved his family and friends and looked forward to every time they could spend together. Danilo passed away Friday, August 17, 2018 in his home having attained the age of 64 years and 25 days. Danilo leaves to cherish his memory, his loving wife: Myrna Banday of St. Robert, MO; his mother: Crispina Yasay of Hawaii; two children: Jennifer Banday of Seattle, WA and Danny Banday (Nicole) of Tacoma, WA; two grandchildren: Aiden John and Ryker Banday; two siblings: Rosie Solomon and Reynaldo Banday, both of Hawaii; numerous nieces, nephews, and other relatives and countless friends around the world. Danilo was preceded in death by his father, Domingo Banday and his brother, Dominador Banday. He will be sadly missed, but fondly remembered by all those who knew and loved him. Services were held at 1:00 p.m. Friday, August 24, 2018 in the Memorial Chapels and Crematory of Waynesville / St. Robert. The songs “Amazing Grace” and “One Eagle’s Wings” were played. Serving as escorts were the United States Army. Burial with military honors followed in the Missouri Veterans Cemetery of Waynesville with military honors being provided by the United States Army of Fort Leonard Wood, Missouri. Memorial contributions may be made in memory of Danilo Banday and may be left at the funeral home.

The family of SFC (Ret) Danilo M. Banday created this Life Tributes page to make it easy to share your memories.