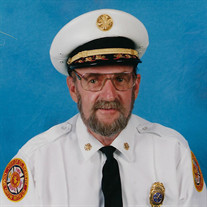 Danny Clay Fry, son of the late Jack Wallace Fry and Lillian Marie (Miller) Fry, was born July 21, 1944 in St. Robert, Missouri. He passed away Thursday, February 6, 2020 in his home after a battle with cancer. He had attained the age of 75 years. At a very young age, Danny began his working career by delivering newspapers and shining shoes. At the age of 8, he began his fire department career. He went on calls with his father and held the hand break on the fire truck. This grew into his passion of public service as a fire fighter and wrecker operator. Danny helped start the Waynesville Rural Fire Department and after a time, he served as fire chief of three fire departments…Waynesville Rural, St. Robert and Waynesville City. He touched a lot of lives through his public service. He continued to learn, he trained many volunteer fire fighters, mentored his fire crews, and taught Fire Science for University of Missouri-Columbia. Jack’s Towing Service was started by Danny’s father and Danny began working in the wrecker service as early as he started in the fire business. He served in this capacity for 60 years and started Poor Boys in 1980 where he offered wrecker service, auto repairs and salvaged parts to the community. On April 22, 1973, Danny was united in marriage to Donna Jean Walsh. They shared over 46 years of marriage and together they shared two children: Donald Len Fry and Dennēa Marie Fry. In his spare time, Danny collected fire trucks and wreckers. You never knew exactly where his free time started and his work time ended because he loved serving the community so much that they both went hand in hand. Danny was a man of many hats. Over his lifetime, he has served as fire fighter, wrecker operator, auto mechanic, Deputy Sheriff for Pulaski County for 16 years, Director of Emergency Management, Arson Investigator and Fire Chief in the area from 1972-1998. There really is no way to count all the lives he has touched by serving his community. Danny will be sadly missed, but fondly remembered by all those who knew and loved him. He leaves to cherish his memory his wife: Donna Fry of the home; one son: Don Fry of St. Robert, MO; two grandchildren: Stephen Gowen and Cody Fry; one brother: Ricky Fry (Penny) of St. Robert, MO; three sisters: Debbie Hayes of Jacksonville, FL, Candy Ayers of St. Robert, MO and Pam Adams (Mark) of Waynesville, MO; several nieces, nephews, other relatives and friends. In addition to his parents, Danny was preceded in death by his daughter: Dennēa Marie Fry; sister: Jacqueline Fry; and brother: Oren Ray “Jr” Matney. Danny’s legacy will certainly live on in our community and hearts forever. Funeral services were held at 11:00 a.m. Saturday, February 15, 2020 in the St. Robert Community Center of St. Robert, Missouri with Pastor Danny Graves officiating. The songs “My Way” by Frank Sinatra, “One Wing in the Fire” by Trent Tomlinson, “Go Rest High on that Mountain” by Vince Gill and “Shine Your Light” by Robbie Robertson were played. Jennifer Fry, Terry Roberson and Mike Shempert, all recalled their wonderful memories of Danny. Serving as escorts were Terry Crawford, Roger Graves, DJ Halverson, Richard Saleski, Andy Baker and Doug Yureko. Burial followed in the Waynesville Memorial Park Cemetery of Waynesville. Services were under the direction of Memorial Chapels and Crematory of Waynesville / St. Robert. Memorial contributions may be made in memory of Danny Fry and may be left at Memorial Chapels and Crematory of Waynesville / St. Robert.

Danny Clay Fry, son of the late Jack Wallace Fry and Lillian Marie (Miller) Fry, was born July 21, 1944 in St. Robert, Missouri. He passed away Thursday, February 6, 2020 in his home after a battle with cancer. He had attained the age of 75... View Obituary & Service Information

The family of Danny Clay Fry created this Life Tributes page to make it easy to share your memories.