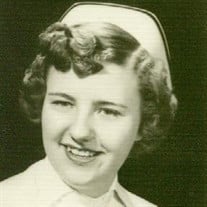 Darlene Jeanne Yocum, daughter of the late Robert and Jean (Swalve) Moore, was born July 5, 1933 in Titonka, Iowa. As a young child, Darlene and her family moved to Illinois and she graduated from Armstrong High School in Armstrong, Illinois. After graduating from high school, Darlene entered the Nursing College in Danville, Illinois and graduated with her nursing certification. She immediately went to work and approximately 35 years ago, moved to the Fort Leonard Wood, Missouri where she began working at the General Leonard Wood Army Community Hospital where she remained until her retirement. In her spare time, she enjoyed quilting, gardening and doing handwork. She was a very selfless person and loved being able to help others. One way in particular she helped was by transporting people who needed a ride to different appointments. One of Darlene’s greatest joys was her children, grandchildren and great-grandchildren. She loved her family dearly and treasured the times that she could spend with them. Darlene had made a profession of faith and was very active in the Church of Christ in Waynesville. She helped every time she could. Darlene went home to be with her Lord Thursday, May 26, 2016, in her home in Waynesville having attained the age of 82 years. She will be sadly missed, but fondly remembered by all those that knew and loved her. Darlene leaves to cherish her memory, two daughters, Gloria Mahorney (Michael) of Rossville, IL, and Sandra Bicknell of Pasadena, TX; 21 grandchildren, and 4 great-grandchildren; two brothers, Robert Moore (Pat) of Rossville, IL and Dewain Moore (Marilyn) of Rossville, IL; a sister, Delores Winters of Kingman, IN; a number of nieces and nephews; as well as a host of other relatives and friends. In addition to her parents, Darlene was preceded in death by one son: James Michael France. Services were held at 2:00 p.m. Tuesday, May 31, 2016 in the Memorial Chapels and Crematory of Waynesville / St. Robert with Bro. Paul Fisher officiating. The song “Amazing Grace” was played. Interment was held at 10:00 a.m. Thursday, June 2, 2016 in the Partlow Cemetery of Armstrong, Illinois under the direction of Memorial Chapels and Crematory of Waynesville / St. Robert.

Darlene Jeanne Yocum, daughter of the late Robert and Jean (Swalve) Moore, was born July 5, 1933 in Titonka, Iowa. As a young child, Darlene and her family moved to Illinois and she graduated from Armstrong High School in Armstrong, Illinois.... View Obituary & Service Information

The family of Darlene Jeanne Yocum created this Life Tributes page to make it easy to share your memories.