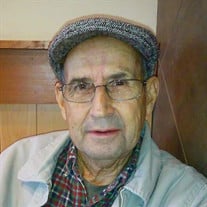 Darold James Wieners, Sr. was born on August 28, 1937 to Joseph Henry and Annie May (Delancy) Wieners in Dry Creek, Missouri which is now Fort Leonard Wood. He went to be with his Lord on Tuesday, August 30, 2016 in Mercy Hospital, Springfield, Missouri surrounded by his loving wife and daughters having attained the age of 79 years. Darold grew up in Buckhorn, Missouri where he attended Pleasant Grove School before transferring to Waynesville High School. Darold has always been a hardworking man and began his working career at the age of 15 when he worked at the tailor shop on Fort Leonard Wood pressing clothes. At the age of 18 Darold moved to Garden City, Kansas and worked at the Sugar Beet Refinery. Darold married Carolyn and to his union was born Lori Jo. Darold and Carolyn divorced and Darold moved back to Waynesville. Darold begin working for Floyd Mooney running the Oldsmobile Dealership and was the body shop manager at Mark Twain Motors, which was also owned by Floyd Mooney. Darold worked at several other dealerships over the years to include VL Long Chevrolet and owned and operated St. Robert Auto Repair with Alvie Foote. In 1978 Darold opened Wieners Auto Body and operated the business for nearly 30 years. Darold also taught Auto Body Repair at the Waynesville Vo-Tech/Career Center after a long day’s work at his own shop. He loved to each other’s what he knew and took much pride in teaching. On March 7, 1959 in Waynesville, Missouri Darold married the love of life, Zella Mae Crossland. They shared over 57 years of marriage and were blessed with 5 children: Mary, Darold Jr., Tammy, Jennifer and Florence. At the age of 26 Darold accepted Jesus Christ as his savior and became a member of New Friendship Baptist Church. At the time of his death he served as deacon. He loved working at the church and spent over 30 years being the church bus driver. He loved bringing people to church through this ministry. In his spare time, Darold loved being outdoors. He loved to fish for trout and camp. Darold loved watching birds and squirrels and spending time with his beagle, Sunday. Darold was a past member of Cave State Cruisers and a member of the Hooker Cemetery Board. Darold was also a founding member of the Pulaski County Ambulance Board and served in the capacity for 30 years, which he recently was recognized for. He loved serving his community and making Pulaski County a wonderful place for not only his family but for every family of Pulaski County. Darold will be sadly missed but fondly remembered by those who knew and loved him. He leaves to cherish his loving wife, Zella of the home, three daughters, Mary Hendrix of Laquey, Tammy (Kent) Hicks of Laquey and Jennifer (Keith) Watson of Richland; two brothers Lester (Delores) Wieners of Independence, MO and Clarence (Judy) Wieners of Laquey, MO; one sister, Dorothy Coogan of Wayneville; one sister in law, Ruth Wieners of Independence, MO and many grandchildren, great grandchildren, nieces, nephews, other relatives and friends. In addition to his parents, Darold was preceded in death by two daughters, Florence Wieners and Lori Jo Kelley, one son: Darold Wieners, Jr.; three brothers, Willie, Ersie and Howard Wieners, and two sisters, Hilda Vogt and Clara Williams. Funeral services were held at 10:00 a.m. Friday, September 2, 2016 in the Memorial Chapels and Crematory of Waynesville / St. Robert with Bro. Gary Humphrey and Bro. Jim Minor officiating. Calvin Gladden sang “Say I Do”, Wes Ellzey sang “Daddy’s Will” and Mary Lou Ellzey sang “I Won’t Have to Cross Jordan Alone”. The song “Nobody’s Darling But Mine” by Merle Haggard was played. Serving as escorts were Darold’s loving grandsons. Burial followed in the Center Point Cemetery of Waynesville, Missouri. In lieu of flowers, the family suggests memorial contributions be made in memory of Darold Wieners to the New Friendship Baptist Church and may be left at the funeral home.

Darold James Wieners, Sr. was born on August 28, 1937 to Joseph Henry and Annie May (Delancy) Wieners in Dry Creek, Missouri which is now Fort Leonard Wood. He went to be with his Lord on Tuesday, August 30, 2016 in Mercy Hospital, Springfield,... View Obituary & Service Information

The family of Darold James Wieners created this Life Tributes page to make it easy to share your memories.