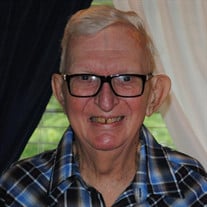 David Scott Harris, son of Clayton and Edrie (Scott) Harris, was born December 2, 1943, in Denver, Colorado. He departed this life Wednesday, November 24, 2021, in his home, in Richland, Missouri, at the age of Seventy-Seven Years, Eleven Months and Twenty-Two Days. On February 10, 1968, he was united in marriage to Anna Irene Gill. They shared forty-six years of marriage before her passing in 2014. They were blessed with two precious children, Darlene, and Kevin. He was born in Colorado and grew up there. He later entered the United States Army. It was while in the service he met and married Anna. After he was Honorably Discharged from the Army, he worked as a meat cutter for a while, before going to work at Fort Leonard Wood in the Depart of Logistics. He retired from there in 2001. He loved his family dearly and greatly enjoyed the times spent with them. In his spare time he enjoyed fishing, hunting, cutting wood, and playing marbles and cards. David leaves to cherish his memory, two children, Darlene Fisher of Richland, MO, and Kevin Harris (Carmen Sue) of Richland, MO; four grandchildren, Taylor Harris, Carson Murray (Cyrus), Keith Joiner (Kim), and Loretta Rhoades; seven great-grandchildren and eleven great-great-grandchildren; a brother, Fred Harris of Colorado Springs, CO; his sister, Jeanie Craighead (Don) of Republic, MO; a number of nieces and nephews; as well as a host of other relatives and friends. He was preceded in death by his parents; his wife, Anna; and a brother, Thomas Harris. David will be fondly remembered and greatly missed by all those who knew and loved him. We celebrate his life and cherish the memories he created for his family and many friends. He will live on in our hearts forever. Services were held at 2:00 p.m., Tuesday, November 30, 2021, in the Memorial Chapel of Richland with pastor Matt Brady officiating. Friends and family served as escorts. Burial with military honors followed in the Oaklawn Cemetery of Richland, MO. Services were under the care and direction of Memorial Chapel of Richland. Memorial Contributions in memory of David Harris can be made and left at the funeral home. Online condolences can be sent at www.memorialchapelsandcrematory.com

David Scott Harris, son of Clayton and Edrie (Scott) Harris, was born December 2, 1943, in Denver, Colorado. He departed this life Wednesday, November 24, 2021, in his home, in Richland, Missouri, at the age of Seventy-Seven Years, Eleven Months... View Obituary & Service Information

The family of David Scott Harris created this Life Tributes page to make it easy to share your memories.