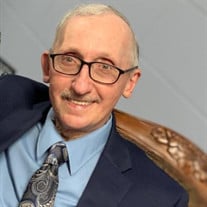 David Allen Henson, better known as “Curley,” to his family and friends, was born to Jewell Dean Henson and Oma Lee (Hicks) Henson, on December 23, 1954, in Simmons Hospital of Denver Colorado. Due to his father’s military career, Curley’s family moved to places like, his favorite state, Savanna Georgia, where he became such a fan of the Atlanta Braves, then on to Libya, and to the Philippines. He went to school in Brighton, Colorado, where he graduated. Curley also attended college in Colorado before moving to Richland, Missouri, living there his entire life. Curley professed his faith in God and was a member of the First Christian Church of Richland. During his working years Curley was employed at Twehouse Construction and H.D. Lee, before starting his long career at the local supermarket, Evans Grocery, now known as, Town and Country, where he worked until the last week of his life. He was a hard-working man. Just a couple weeks earlier one of his old friends asked him when he was going to retire? Curley quickly replied, “Not until I get my last grandchild through college!” His love, and dedication to his community, family, job, and the loyal customers he served everyday was unmatched. Ask him for anything and he’d do his absolute best to make it happen. His strongest desire in life, was to be “a good Dad, Gampa, and Pops.” His family was his pride and joy, and he was never happier than when he was spending time them, especially his grandkids, and each one held a special place in Curley’s heart. In his spare time Curley enjoyed watching the Atlanta Braves and the Falcons & Hawks. He was an avid golfer, and in fact he played golf with one of his best friends, Paul Lathrop, the week before his passing, and during their scrambles game, they shot 1 under. In his younger years he was a professional bowler, and also loved to play slow pitch softball. With his loving family near his side, Curley entered into the presence of God having attained the age of 66, on the evening of Friday, July 16, 2021, while at his daughter’s home in Richland. He was preceded in death by his parents. He leaves behind to cherish his memory, two daughters, Amy Edwards (Crystal) of Richland, MO, and Annie Rhoads (Wes) of Rolla, MO; five grandchildren, Austin, Elliot, Joshua, Noah and Brendaen; two brothers, Paul Henson (Candice) of Richland, MO, and Rob Henson (Kim) of Crocker, MO; a sister, Bev Duffey of the State of New Jersey; a number of nieces and nephews; as well as a host of other relatives and friends. We all leave a footprint behind in this old world in one way or another, Curley’s will include a great sense of humor, as he was quite the jokester throughout his lifetime. His family will remember him as a genuinely kind and generous man, truly one of a kind, and one who will certainly be missed. Services were held at 11:00 a.m., Friday, July 23, 2021, in the Memorial Chapel of Richland with Pastor Mitch Henson officiating. Daughter, Annie Rhoads shared a touching eulogy about her father, and daughter, Amy Edwards shared tender comments and a lovely poem. Grandson, Austin Edwards played “Gabriel’s Oboe” on his oboe; other CD selections included Jo Dee Messina’s “Heaven Was Needing a Hero,” “Free Bird” by Lynyrd Skynyrd, “When I Get Where I Am Going” by Brad Paisley, “Hallelujah” by Pentatonix, “I Drive Your Truck” by Lee Brice, and “All Right Now” by Free. Serving as escorts were Kyle, Kris, and Landin Henson, Elliot Holloway, Austin Edwards, and Paul Lathrop. Burial followed in the Oaklawn Cemetery of Richland, Missouri. Services were under the care and direction of Memorial Chapel of Richland. In Lieu of flowers, Memorial Contributions are requested in memory of David “Curley” Henson can be made and left at the funeral home. Online condolences can be sent at www.memorialchapelsandcrematory.com

David Allen Henson, better known as &#8220;Curley,&#8221; to his family and friends, was born to Jewell Dean Henson and Oma Lee (Hicks) Henson, on December 23, 1954, in Simmons Hospital of Denver Colorado. Due to his father&#8217;s military... View Obituary & Service Information

The family of David Allen "Curley" Henson created this Life Tributes page to make it easy to share your memories.

David Allen Henson, better known as “Curley,” to his family and...