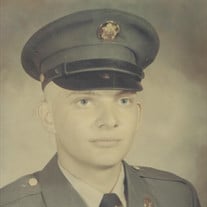 SSG (Ret) David A. Van Vleet, son of the late Richard J. and Marilynn K. (Cervinka) Van Vleet, was born July 16, 1950 in Chicago, Illinois. As a young boy, David and his family moved to Ohio and he grew up in Withamsville and graduated from Amelia High School. Shortly after graduating from high school, David entered the United States Army and served his country faithfully until his retirement. He had attained the rank of Staff Sergeant and earned several awards and commendations. He was stationed in Germany, Ft. Hood, TX, Korea and at the time of his retirement he was at Ft. Leonard Wood, Missouri where he remained. He continued serving his country as a civil service employee at the commissary on Fort Leonard Wood. On July 23, 2004, David was united in marriage to Christel K. (Erhardt) Rodriguez and upon this union, two families were joined. They shared four children: Richard, Johnny, Angela and Brian. In his spare time, David enjoyed being outdoors while fishing, but his greatest enjoyment came in spending time with his wife, children and especially his grandchildren. They were the apples of his eye and he was proud of each and every one of them. David passed away Saturday, June 2, 2018 in the University of Missouri Hospital of Columbia, Missouri having attained the age of 67 years. He will be sadly missed, but fondly remembered by all those that knew and loved him. David leaves to cherish his memory, his loving wife: Christel Rodriguez of the home; four children: Richard William Van Vleet (Amy) of Round Rock, TX, Johnny Rodriguez (Adriana) of El Paso, TX, Angela Nia Holmes (Walter) of Killeen, TX and Brian Rodriguez (Melissa) of Willits, CA; eleven grandchildren: Samantha, Patrick, Jason, Bryce, David, Tooa, Tony, Christopher, Melissa, Lundyn and Oscar; two great grandchildren: Javen and Marianna; five siblings: Marilynn Richie Hedges (Harold) of Florence, KY, Sally Jo Jones of Batavia, OH, Susan Kay Glos (Gregory) of Franklin, TN, Paul Henry Van Vleet (Margaret) of Cincinnati, OH and Kathy Ann Falcón (Robert) of Cincinnati, OH; several nieces, nephews, other relatives and friends. In addition to his parents, David was preceded in death by one brother-in-law: David Jones, Sr. Graveside services with military honors were held at 1:00 p.m. Thursday, June 7, 2018 in the Missouri Veterans Cemetery of Waynesville, Missouri with military honors being provided by the United States Army of Fort Leonard Wood, Missouri. Services were under the direction of Memorial Chapels and Crematory of Waynesville / St. Robert. Memorial contributions may be made in memory of David Van Vleet and may be left at the funeral home.

SSG (Ret) David A. Van Vleet, son of the late Richard J. and Marilynn K. (Cervinka) Van Vleet, was born July 16, 1950 in Chicago, Illinois. As a young boy, David and his family moved to Ohio and he grew up in Withamsville and graduated from... View Obituary & Service Information

The family of SSG (Ret) David A. Van Vleet created this Life Tributes page to make it easy to share your memories.