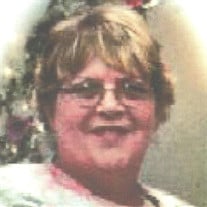 Debbie Lorraine Zeigenbein, daughter of the late Jason Lee Mayhall and Helen Marcel (Whitten) Gregory, was born May 9, 1955 in Lebanon, Missouri where she grew up and graduated from Lebanon High School. Debbie was united in marriage to Lloyd Tabor and they were blessed with four children: Sherry, Lloyd, Melissa and Chance. On June 19, 1992, Debbie was united in marriage to Frank Scott Zeigenbein in Miami, Oklahoma. They shared over 23 years of marriage together and were blessed with one son: Darren. Debbie and the family lived in the Competition, Missouri area and later moved to Richland, Missouri where they remained until five years ago when they moved to Dixon, Missouri. For a few years, Debbie worked for Moeller Marine Products in Lebanon. Her most rewarding work was being able to stay at home and take care of her family. She loved spending time with her family and friends, especially the grandchildren. She also liked to go camping or just being outside enjoying God’s creation. Debbie had made a profession of faith and was an avid member of the Seaton Faith Fellowship Church in Dixon, Missouri. She loved attending Bible study and was a wonderful Christian lady. Debbie went home to be with her Lord Monday, May 30, 2016, in the Phelps County Regional Medical Center of Rolla, Missouri having attained the age of 61 years. She will be sadly missed, but fondly remembered by all those that knew and loved her. Debbie leaves to cherish her memory, her husband, Frank of the home; five children: Sherry Tabor of Wichita, KS, Lloyd Tabor of Jefferson City, MO, Melissa Tabor and Chance Tabor, both of Springfield, MO, and Darren Zeigenbein of Lebanon, MO; six grandchildren; five great-grandchildren; one brother: Jason Mayhall of Lebanon, MO; three sisters: Patricia Cunningham (John) of Dorchester, IL, Kelly Greeno (Phil) of Lebanon, MO, and Bonnie Waterman (Don) of Eldridge, MO; her father-in-law: Clarence Zeigenbein (Brenda) of Waynesville, MO; her mother-in-law: Lona Mae Zeigenbein of Devil’s Elbow, MO; a number of nieces and nephews; as well as a host of other relatives and friends. Services were held at 11:00 a.m., Friday, June 3, 2016, in the Seaton Faith Fellowship Church of Dixon, Missouri with Pastor Helen Winters officiating. Favorite recorded music selections included, "I Can Only Imagine," "I'll Remember You," and "Amazing Grace." Serving as escorts were, J.D. Cato, Sam Zeigenbein, Wayne Zeigenbein, Don Waterman, Matt Baker and Jon Shattuck. Burial followed in the Seaton Faith Fellowship Cemetery, Dixon, Missouri. Services were under the direction of Memorial Chapel of Richland, Missouri. Memorial contributions can be made in memory of Debbie Zeigenbein, and contributions can be left at the funeral home. Online condolences can be sent at www.memorialchapelsandcrematory.com

Debbie Lorraine Zeigenbein, daughter of the late Jason Lee Mayhall and Helen Marcel (Whitten) Gregory, was born May 9, 1955 in Lebanon, Missouri where she grew up and graduated from Lebanon High School. Debbie was united in marriage to Lloyd... View Obituary & Service Information

The family of Debbie Lorraine Zeigenbein created this Life Tributes page to make it easy to share your memories.