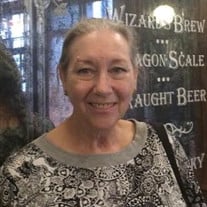 Deborah Ann Martell, daughter of the late Robert L. and Nina Faye (Shaw) Rowlands, was born November 30, 1954 in Utica, New York where she grew up and graduated from high school. Shortly after graduating from high school, Deborah entered the United States Army and served her country faithfully until her honorable discharge after 17 years. She began her service in the 57th Military Police Honor Guard at West Point, New York in 1975. She attained the rank of CW2 and served with the Military Police and the Criminal Investigations Command (CID). She served at Ft Belvoir, Virginia; Mannheim, Germany; Ft. Campbell, Kentucky; Camp Casey, Korea; and Ft. Stewart, Georgia. After leaving the service, Deborah worked in the Insurance industry, then the Department of Homeland Security as a Security Specialist until her retirement from civil service in February 2016. In her spare time, Deborah was an avid Pittsburgh Steelers fan. She was active in the United Methodist Church and local animal rescue groups. Most importantly, she loved spending time with her daughter. Deborah passed away Tuesday, July 5, 2016 in the Life Care Center of Waynesville at 61 years of age. She will be sadly missed, but fondly remembered by all those that knew and loved her. In addition to her parents, Deborah was preceded in death by her brother, William “Bill” Rowlands. Deborah leaves to cherish her memory, her daughter and son-in-law: Leslie and Aaron Jones of Mt Vernon, IN. Services were held at 3:00 p.m. Saturday, July 9, 2016 in the Memorial Chapels and Crematory of Waynesville / St. Robert with Pastor Marsha Vincent officiating. Family members and friends recalled their wonderful memories of Deborah. The songs “Amazing Grace” and “In the Garden” were played.

The family of Deborah Ann Martell created this Life Tributes page to make it easy to share your memories.