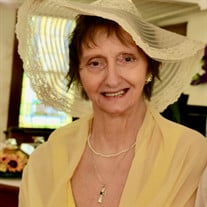 Deborah Winland, the only child of Otto and Mary Gerwolls, was born September 12, 1950, in Holyoke, Massachusetts, where she grew up and attended school. Later Deb went to night school earning her GED. She later moved to Connecticut, living there for some time before moving to Missouri in 2007, there she met Stanley Edward Winland. The two fell in love and were married on July 19, 2015 in the Richland United Methodist Church. Deborah and Stanley lived in Waynesville, Lebanon, and Stoutland area after Stanley’s discharge from the Army, before deciding to make their home in Richland, where they could also attend church, as their health permitted. Deborah enjoyed taking care of her home. She also worked outside her home at several fast food restaurants during her lifetime until she became disabled. She then had to learn to enjoy the simple pleasures of life. She tapped into her inner creativity with the hugely popular adult coloring books, letting her world blossom with color and designs. She also enjoyed flowers, watching TV, collecting teapots, and listening to the “old style” country music. She adored animals...all animals! Big, little, short, or tall, it didn’t matter to Deborah, she loved all God’s creatures, especially her two dogs, Gracie and Blonde, and her cat, Dusty. These little guys brought great joy to her life. Deborah’s life wasn’t always easy but she did her best to enjoy that which God gave her. When life gave her lemons, she made lemonade, as the old saying went. Deborah persevered. On the morning of Tuesday, February, 6, 2018 Deborah quietly left her earthly home and went home to be Jesus having attained the age of 67 years. The memories Deborah made during her lifetime, will be treasured forever in the hearts of those who knew and loved her. She leaves behind to cherish her memory her husband, Stanley of the home, and her mother, Mary Gerwolls of the state of CT; her three beloved pets, other relatives and friends. Deborah was preceded in death by her father, Otto Gerwolls. A celebration of life service was held at 1:00 p.m., Sunday, February 18, 2018 in the Richland United Methodist Church of Richland, Missouri, with Pastor Mitch Henson officiating. Pastor Mitch also sang, “Softly and Tenderly” and “The Old Rugged Cross.” Interment was in the Missouri Veterans Cemetery, Waynesville, Missouri. Arrangements were under the care and direction of Memorial Chapel of Richland. Memorial contributions may be made in memory of Deborah Winland and may be left at the funeral home.

Deborah Winland, the only child of Otto and Mary Gerwolls, was born September 12, 1950, in Holyoke, Massachusetts, where she grew up and attended school. Later Deb went to night school earning her GED. She later moved to Connecticut, living... View Obituary & Service Information

The family of Deborah Winland created this Life Tributes page to make it easy to share your memories.

Deborah Winland, the only child of Otto and Mary Gerwolls, was...