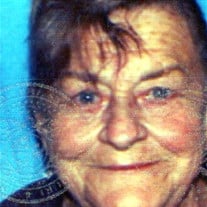 Della Jean Liffick, daughter of the late Charles Robert and Cora Nancy (Skaggs) Terrel, was born July 7, 1935, in Los Angeles, California. Della attended school in California and Oklahoma as a child, later graduating from high school. Della met Abner Junior Liffick, the two fell in love and were married on June 23, 1954 in El Monte, California, and were shortly blessed with two children. Della and Abner shared over 47 years together before his passing on October 2, 2001. For a brief time in the early years of their marriage, Della worked outside her home as a waitress. However, the life of a Navy wife was challenging, and Della made a decision to stay home and raise her children. Della made a profession of faith and was baptized. She loved the Lord with all her heart. She attended Westside Baptist Church and enjoyed helping out in the children’s AWANA program. In her spare time, Della enjoyed sewing, spending time outdoors fishing and mowing her lawn. Della went home to be with her Lord on the evening of Friday, July 18, 2014 in the Lake Regional Hospital, Osage Beach, Missouri, having attained the age of 79. All those who had the pleasure of knowing her will cherish the memories and miss her laughter. Della leaves to cherish her memory, her son Chuck Liffick of the home; one granddaughter: Dawnya Allred of Arizona; 2 great-grandchildren; and several other relatives and friends. Although we will miss her warmth and laughter, the pain of our loss is softened by the memory of who she was, and the joy and happiness she brought to so many hearts. We should celebrate that she has gone home to be with her beloved parents, husband, daughter, and so many others with our Heavenly Father. Arrangements were under the direction of Memorial Chapels of Richland.

The family of Della Jean Liffick created this Life Tributes page to make it easy to share your memories.