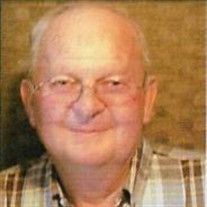 Delmar Steward, son of the late Joseph Newton and Bertha Fredonia (Cook) Steward, was born July 1, 1942 in Winnipeg, Missouri. Shortly after graduating from high school, Delmar entered the United States Marine Corp and served his country faithfully until his honorable discharge in 1963. He had attained the rank of Lance Corporal and several awards and commendations. On February 22, 1964, Delmar was united in marriage to Shirley Lee Henson. They shared over 52 years of marriage together and were blessed with two children: Edward Lee and Connie Faye. As a young man, Delmar made a very important decision in his life and accepted Jesus Christ as his personal Savior. He was baptized on March 21, 1976 and was a member of Grace Baptist Church of Richland. Delmar was a hardworking man and had a wonderful work ethic. He worked as a welder at a boat manufacturing plant and worked his way up to a supervisor position before retiring. In his spare time, Delmar enjoyed being outdoors while hunting and fishing. He was an avid gun and knife collector and could take an old gun and restore it like new. They were his prized possessions and before his passing, he proudly gave them away to family and friends. Delmar also was a visionary. He would always say “another man’s junk is another man’s treasure” and he took that literally. He could envision a use for most anything he found. He also enjoyed working in his garden and took great pleasure in sharing his crop of tomatoes and cucumbers with everyone. Most importantly, Delmar adored his family and spending time with them; especially the grandchildren. He treasured those family get togethers and always looked forward to getting together with his family. Delmar went home to be with his Lord Friday, December 30, 2016 at his home having attained the age of 74 years, 5 months and 29 days. He will be sadly missed, but fondly remembered by all those that knew and loved him. Delmar leaves to cherish his memory, his loving wife: Shirley Steward of the home, one daughter Connie Becker and her husband C.J. of Richland, MO; three grandchildren: Wade Steward and fiancé Billie Hicks of Richland, MO, Amanda Becker-Nguyen and Mary Nguyen both of Springfield, MO and Justin Becker and his fiancé Renee Watts of Springfield, MO; two great grandchildren: Landon Curtis Dwight Becker and Cayden Lynn Becker; four brothers: Elmer Steward of Richland, MO, Robert Steward of Montreal, MO, Larry Steward of Richland, MO and Gary Steward of Tuscumbia, MO; one sister: Maxine McDaniel of Richland, MO; his forever daughter-in-law: Theresa Turner Steward of Richland, MO; several nieces, nephews, other relatives and friends. In addition to his parents, Delmar was preceded in death by his son, Edward Lee Steward; one brother, Bill Steward; and one sister, Darlene Allen. Services were held at 11:00 a.m. Tuesday, January 3, 2017 in the Memorial Chapel of Richland Funeral Home with Pastor Fred Bobe officiating. Favorite music selections included “In the Garden”, “Daddy’s Little Girl”, “Outskirts of Heaven”, “When I Get Where I’m Going” and “Go Rest High on that Mountain”. A loving tribute of special memories was shared by grandson Justin Becker. Serving as escorts were Boyd Hendrix, A.J. Hendrix, Dennis Ogle, John Henry, Richard Steward and Tony Paterno. Honorary escorts were Gerald Payne, Raymond Long, Rick Messer and Charlie Wiggins. Burial with Military Honors provided by the United States Marine Corp from Fort Leonard Wood, Missouri followed in the Oaklawn Cemetery of Richland. Services were under the direction of Memorial Chapel of Richland. In lieu of flowers, the family has requested Memorial Contributions may be made in memory of Delmar Steward, and may be left at the Memorial Chapel of Richland. Online condolences may be sent to www.memorialchapelsandcrematory.com

The family of Delmar E. Steward created this Life Tributes page to make it easy to share your memories.