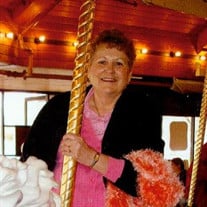 Delores Ellen Shafer, daughter of the late Melvin Earl and Bertha Kidwell, was born June 29, 1941 in Indianapolis, Indiana where she grew up and graduated from Southpart High School. On October 11, 1986, Delores was united in marriage to David Earl Shafer at Fort Leonard Wood, Missouri. They shared over 29 years of marriage together and many wonderful memories. During her working years, Delores worked for three years with the Post Quartermaster Laundry Dry Cleaning and then transferred to the Adjutant General’s Office of Records and worked as the lead records clerk for 17 years. She retired in 1996. In her spare time, Delores was an avid square dancer. She was Square Dancer of the Year for Missouri in 2008 and served as president of the Missouri Federation of Square N Round Dance clubs in 2006. She enjoyed traveling with Dave and most importantly, she treasured spending time with her family. Delores was a member of the Travelers Square Dance Club for 30 years, and the American Legion Auxiliary Unit 0331 - St. Robert for 30 years. Delores passed away Tuesday, August 23, 2016 in the University of Missouri Hospital of Columbia, Missouri having attained the age of 75 years. She will be sadly missed, but fondly remembered by all those that knew and loved her. Delores leaves to cherish her memory, her husband, David of the home; four children: Jack Foster, Jr., Patrick Foster, and Michael Foster, all of Kansas City, MO and Laura Smith of Des Moines, IA; eleven grandchildren; four nephews: Jeff, Steve, Wally and Paul Somers; other relatives and friends. In addition to her parents, Delores was preceded in death by two brothers: Ivan and Lauren; and three sisters: Shirley, Donis and Betty. Funeral services were held at 12:00 p.m. Thursday, September 1, 2016 in the Memorial Chapels and Crematory of Waynesville / St. Robert with Pastor Christopher Hendrix officiating. The songs “Amazing Grace”, “Family Bible”, “Peace in the Valley”, “May I Have This Dance” and “I Will Always Love You” were played. Serving as escorts were Bruce Gilder, Pat Foster, Michael Foster, Jack Foster, Ron Selfors, and Carl Boone. Serving as honorary escorts were Chet Saladin, Dan Bruemmer and John Stover. Burial followed in the Missouri Veterans Cemetery of Waynesville, Missouri. Memorial contributions may be made in memory of Delores Shafer to the Ellis Fischel Cancer Center or the Travelers Square Dance Club and may be left at the funeral home.

Delores Ellen Shafer, daughter of the late Melvin Earl and Bertha Kidwell, was born June 29, 1941 in Indianapolis, Indiana where she grew up and graduated from Southpart High School. On October 11, 1986, Delores was united in marriage... View Obituary & Service Information

The family of Delores Shafer created this Life Tributes page to make it easy to share your memories.