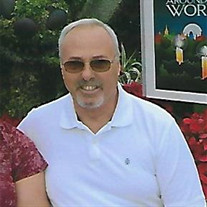 Dennis Alan Brunnert, son of Sylvester Francis Brunnert and Mary Theresa (Wakefield) Brunnert, was born August 7, 1950 in St. Louis, Missouri. He grew up in Hazelwood, Missouri and graduated from Hazelwood Central High School. Dennis entered the United States Army and served his country faithfully until his honorable discharge in 1972. He had attained the rank of Specialist 4 and earned the National Defense Service Medal, Vietnam Campaign Medal w/60 device, Vietnam Service Medal w/1 Bronze Service Star and the Combat Infantryman’s Badge. On February 15, 2003, Dennis was united in marriage to Patricia Ann Hinkle in Waynesville, Missouri. They shared over 16 years together and many wonderful memories. Dennis was a hardworking man and took great pride in providing for his family. For the majority of his working years, Dennis worked for Meek’s Lumber as a driver, where he received many safe driving awards. In his spare time, Dennis was an avid St. Louis Cardinals baseball fan and loved going to the games. He also enjoyed being outdoors while hunting and fishing and would go every chance he could. Dennis was a life member of the National Rifle Association, North American Hunting Club and the Bow and Barrel Sportsmen Center of St. Robert. Most importantly, he loved spending time with his grandchildren the most and his family and friends. Dennis passed away Tuesday, December 17, 2019 in the Cox Medical South of Springfield, Missouri having attained the age of 69 years. He will be sadly missed, but fondly remembered by all those who knew and loved him. Dennis leaves to cherish his memory, his wife: Pat Brunnert of the home; his mother: Mary Pike of Virginia Beach, VA; two children: Mark Brunnert (Amber) of Hopewell, OH and Jennifer Sheek (Michael) of Alamogordo, NM; six grandchildren: Arizona Sheek, Courtney Moon, Caytlin Brunnert, Mia Brunnert, Addy Brunnert and Autumn Brunnert; one brother: Tim Brunnert (Liana) of Maunaloa, HI; three sisters: Connie Koch (Tom) of Warrenton, MO, Jeannie Binetti (Mike) of Virginia Beach, VA and Karen Morgan (Chris) of the State of Texas; several nieces, nephews, other relatives and friends. Dennis was preceded in death by his father: Sylvester Francis Brunnert, and one sister: Susan Brunnert. Celebration of Life Services were held at 12:00 p.m. Monday, December 23, 2019 in the Memorial Chapels and Crematory of Waynesville / St. Robert with Pastor Danny Graves officiating. The songs "If Tomorrow Never Comes" by Garth Brooks, "Angels Among Us" by Alabama and "Holes in the Floor of Heaven" were played. Serving as escorts were family and friends. Inurnment with military honors followed in the Missouri Veterans Cemetery of Waynesville. Military honors were provided by the Missouri Honors Team. Memorial contributions may be made in memory of Dennis Brunnert and may be left at Memorial Chapels and Crematory of Waynesville / St. Robert.

The family of Dennis Alan Brunnert created this Life Tributes page to make it easy to share your memories.