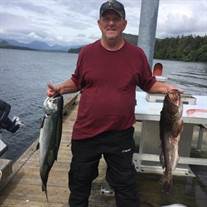 Dennis Lee Chaffee, son of Lyman Junior Chaffee and Joanne Marie (Amos) Farris, was born February 13, 1955 in Muskegon, Michigan where he attended school. At the age of 17, Dennis entered the United States Army and served his country faithfully until his retirement after 20+ years of service. For his faithful service, he earned several awards and commendations and had attained the rank of Sergeant First Class. After retiring from the military, Dennis continued to serve his country as a civil service employee where he retired in 1993. On June 20, 1990, Dennis was united in marriage to Barbara L. Wright in Richland, Missouri. They shared many years of marriage together and wonderful memories. After retiring from civil service, Dennis and Barbara continued to stay in Pulaski County. In his spare time, Dennis enjoyed being outdoors fishing, camping, and riding his 4-wheeler and also traveling. He loved to spend time with his best bud, Bosco, his dog. Dennis passed away Monday, May 24, 2021, in the Missouri University Hospital in Columbia, Missouri having attained the age of 66 years. He will be sadly missed, but fondly remembered by all those that knew and loved him. He is survived by his wife, Barbara of the home; his three children, Billy, Teresa, and Brenda; several grandchildren and great-grandchildren; his mother, Joanne Farris; two brothers, Gary and David Chaffee; two sisters, Tamara Wilkinson and Pamela Dill; two special friends, Charlie Wiggins, Kelli Logan, and Roy and Teresa Holler; a number of nieces and nephews; as well as a host of other relatives and friends. Dennis was preceded in death by his father: Lyman Junior Chaffee; and his mother-in-law: Ruth Chaffee. Graveside funeral Services with full Military Honors were held at 11 a.m. Friday, May 28, 2021, in Missouri Veterans Cemetery FLW, in Waynesville, under the care and direction of Memorial Chapel of Richland. Memorial Contributions in memory of Dennis Chaffee may be left at the funeral home.

The family of SFC (Ret.) Dennis Lee Chaffee created this Life Tributes page to make it easy to share your memories.