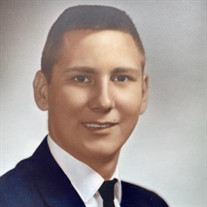 Dennis Wayne Hedrick was born March 2, 1947 in Crocker, Missouri and passed away Sunday, April 4, 2021, in his home surrounded by his loved ones, having attained the age of 74 years. He will be sadly missed, but fondly remembered by all those that knew and loved him. Dennis was preceded in death by his parents, Willie Watson Hedrick and Altha Belle (Fancher) Hedrick; one son: Scott Allen Hedrick; and one sister: Helen Lawson. As a young man, Dennis entered the United States Air Force and served his country faithfully until his retirement after 22 years of service. For his faithful service, he attained the rank of Tech Sergeant and earned several awards and commendations; some of which include: Air Force Commendation Medal, Air Force Achievement Medal, Air Force Outstanding Unit Award, Air Force Good Conduct Medal with 5 Oak Leaf Clusters, National Defense Service Medal, Vietnam Service Medal with 2 Oak Leaf Clusters, Air Force Overseas Short Tour Ribbon, Air Force Overseas Long Tour Ribbon, Air Force Longevity Service Award Ribbon with 3 Oak Leaf Clusters, NCO Professional Military Education Graduate Ribbon, Philippine Presidential Unit Citation, and the Republic of Vietnam Gallantry Cross with Palm. After his retirement from the Air Force, Dennis came back to Crocker, Missouri before moving to Tennessee for a few years. He worked in the heating and air business and eventually moved back to his hometown of Crocker where he spent the remainder of his days. In his spare time, Dennis enjoyed being outdoors while fishing, hunting, camping, and anything else he could do outdoors. He was an avid outdoorsman. Most importantly, he loved his children and family. He was very proud of them and looked forward to every chance they could spend together. Dennis leaves to cherish his memory, his four children: Shannon Jo Counts (Raymond) of Crocker, MO, Josh Plane (Becca) of Blaine, TN, Jeremy Plane of Glenpool, OK, and Matt Plane (Beth) of Knoxville, TN; eight grandchildren: Beth Sharpensteen (Caleb), Chris Counts (Kayla), Scott Plane, Krista Plane, Jett Plane, Landyn Plane, Caitlin Plane, and Lillie Plane; three great grandchildren: Preston Counts, Gunner Counts, and Elijah Sharpensteen; one sister: Wanda Ferguson of Waynesville, MO; one brother: William Hedrick of the State of Arizona; nieces, nephews, other relatives and friends. Graveside services with military honors were held at 2:00 p.m. Friday, April 9, 2021 in the Madden Ford Cemetery near Iberia, MO. Services were under the direction of Memorial Chapels and Crematory of Waynesville / St. Robert. Memorial contributions may be made in memory of Dennis Hedrick and may be left at Memorial Chapels and Crematory of Waynesville / St. Robert.

Dennis Wayne Hedrick was born March 2, 1947 in Crocker, Missouri and passed away Sunday, April 4, 2021, in his home surrounded by his loved ones, having attained the age of 74 years. He will be sadly missed, but fondly remembered by all those... View Obituary & Service Information

The family of TSGT (Ret) Dennis Wayne Hedrick created this Life Tributes page to make it easy to share your memories.