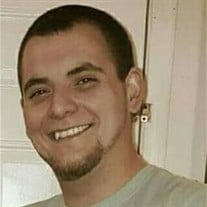 Derek Michael Elam, son of Mark Allen Elam and Teresa Darlene (Hudgens) Elam, was born July 14, 1992 in Springfield, Missouri. He passed away Friday, March 9, 2018 having attained the age of 25 years. As a young boy, Derek grew up in the Laquey, Missouri area where he graduated from high school. Derek stayed in the area and began working for David Hanson at Mid-America Trailer Manufacturing Company, where he worked as a powder coat painter for six years. On December 31, 2016, Derek was united in marriage to Korynn Alicia Steinman in Springfield, Missouri. In his spare time, Derek enjoyed playing basketball, swimming in the lake, playing Madden on the X-box and watching Sunday football, especially his favorite team….the Dallas Cowboys. He also loved music and enjoyed singing and writing his own music. One of his favorite things to do was eat, especially anything with Valentine Salsa. Most importantly, he loved his son and spending time with his family every chance he could. Derek will be sadly missed by all those that knew and loved him. He leaves to cherish his memory, his wife, Korynn Elam of the home; his son Kase Michael-Allen Elam of the home; his father, Mark Elam and his wife, Debra of Cisco, TX; his mother and step-father, Teresa Elam of Lebanon, MO and Miguel Arredondo of Tulsa, OK; one sister, Jessica Scott (Victor Gomez), and their children, Jaime and Jariel of Marshfield, MO; one brother, Mark Elam-Garrett of Springfield, MO; step-siblings, Victor Arredondo of Roswell, NM, Victoria Arredondo of Roswell, NM, Billy Messer (Alissa Stoner) of Lebanon, MO, and Hope Messer of Lebanon, MO; his maternal grandmother, Thelma Tackkett (Howard) of Lebanon, MO; his paternal grandfather, Kenneth Elam of Lebanon, MO; his mother-in-law and father-in-law, Tammy and Steve Shultz of Fort Smith, AR; a number of aunts, uncles, cousins; as well as a host of other relatives and friends. Derek was preceded in death by one brother: Jeremy Scott; his maternal grandfather: Loren Hudgens; and his paternal grandmother: Betty Elam. A Celebration of Life service was held at 1:00 p.m. Saturday, March 17, 2018 in the Memorial Chapels and Crematory of Waynesville / St. Robert with Pastor Danny Graves officiating. Derek’s mother, Teresa Elam, read several family members and friends wonderful memories of Derek. The songs “God, Your Momma and Me”, “I’m Already There” and “You Should Be Here” were played. Serving as honorary escorts were Victor Gomez, Devon Williams, Dallas Austin, G.W. Hobbs, Billy Messer and Miguel Arr. Memorial contributions may be made in memory of Derek Elam and may be left at the funeral home.

Derek Michael Elam, son of Mark Allen Elam and Teresa Darlene (Hudgens) Elam, was born July 14, 1992 in Springfield, Missouri. He passed away Friday, March 9, 2018 having attained the age of 25 years. As a young boy, Derek grew up in... View Obituary & Service Information

The family of Derek Michael Elam created this Life Tributes page to make it easy to share your memories.