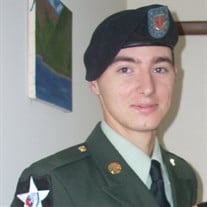 Derick Dewayne Williams, son of Darrel Dean Williams and Regina L. (Mace) Lewis, was born in Mansfield, Missouri. He grew up in Lebanon and attended school there. On August 24, 2002, Derick was united in marriage to Lyssa Louise Cannon in Lebanon, Missouri. This Sunday August 24th would have made 12 years of marriage. They were blessed with five children: Lexi Ann (11), Kayli Rae (10), Olivia LouJean (7), Izabellah Avalene (2) and Isaiah Derick Dewayne (6 months). In 2004, Derick joined the United States Army and served his country faithfully as a “super” mechanic; including a 15 month tour in Iraq, until his transition to the United States Army Reserve in 2008. He earned the Army Good Conduct Medal, National Defense Service Medal, Global War on Terrorism Service Medal, Army Service Ribbon, Overseas Service Ribbon, Driver and Mechanic Badge with Driver-Wheeled Vehicle(s) Clasp, Driver and the Mechanic Badge with Mechanic Clasp and more. He had attained the rank of Specialist. Derick continued serving his county by being a government employee with ECS in Fort Leonard Wood, MO. Derick was the epitome of a family man, he included them in every aspect of his life. His wife and children were his crowning achievements. His hobbies were everything outdoors, and he was an avid fisherman. His relationship with God was very strong. Throughout his long battle with cancer he never doubted the Lord. He truly loved the Lord and read The Bible daily. Derick went to be with the Lord on Friday, August 15, 2014 at the young age of 28, while in the University of Missouri Hospital of Columbia, Missouri. He will be greatly missed, and always remembered by everyone that knew and loved him. Derick leaves to cherish his memory, his wife: Lyssa Williams and his five children: Lexi (11), Kayli (10), Olivia (7), Izabellah (2) and Isaiah (6 months) Williams, all of the home in Dixon, MO; mother: Regina Lynnette Lewis and step-father: Gene Lewis of Lebanon, MO; two sisters: Crystal Newcomb, of the state of Nebraska and Gabby Lewis of Lebanon, MO; one brother: Jon Lewis of Lebanon, MO; great-grandmother: Dottie Ruth Mace of Grovespring, MO; father and mother-in-law: Billy Cannon Jr. and Judi Cannon of Goodwater, AL; brother-in-law: Shawn Cannon of Anniston, AL; brother and sister-in-law: Chris Bowling and Shandel Bowling of Ft. Campbell, KY; two nieces, and ten nephews, and numerous relatives and friends. Derick was preceded in death by his father: Darrel Dean Williams, his paternal grandmother; Loma Iletta Williams “Grandma Loma”, and his maternal grandfather Ralph V. Mace “Grandpa Ralph”. A memorial gathering with military honors will be held at 12:30 p.m. Sunday, August 24, 2014 in the Memorial Chapels and Crematory of Waynesville / St. Robert. A Celebration of Life service will follow at 2:00 p.m. Sunday, August 24, 2014 in the U.S. Army Reserve Center, 7901 Nebraska Avenue, Building 1350, on Fort Leonard Wood. Arrangements are under the direction of Memorial Chapels and Crematory of Waynesville / St. Robert. In lieu of flowers, memorial contributions may be made in memory of Derick Williams and may be left at the funeral home.

Derick Dewayne Williams, son of Darrel Dean Williams and Regina L. (Mace) Lewis, was born in Mansfield, Missouri. He grew up in Lebanon and attended school there. On August 24, 2002, Derick was united in marriage to Lyssa Louise Cannon... View Obituary & Service Information

The family of Derick Dewayne Williams created this Life Tributes page to make it easy to share your memories.