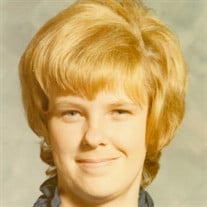 Elsie Diann George was born March 13, 1948 in Waynesville, Missouri. She was raised by her parents, Georgia and Clyde Primus as they traveled the world compliments of the United States Army. They lived in Alaska, Kansas, Germany and the last and final post being in California. Diann married Robert Michael George in September 1972. Their only son Christopher Michael was born March 1976. Diann and Mike made their home in Newhall, California. Diann worked as a teaching assistant for her mother for many years in County of Los Angeles School District. She also worked with special needs children. Diann had a love for writing. She wrote and published a children’s book “The Peanut Butter Witch”. She presented programs at several elementary schools in California and Missouri. Diann was very artistic. She loved all things beautiful and she illustrated her children’s book. In 1989 Diann, Mike and Chris moved to Sasakwa, Oklahoma and the family lived on a farm. In 2002, they moved to Waynesville, Missouri to be near Diann’s mother. Diann was a member of Deerlick Baptist Church in Waynesville. Diann went home to be with her Lord Tuesday, September 8, 2015 at Barnes Jewish Hospital in St. Louis, Missouri. She will be sadly missed by those who loved her. She is survived by her husband Mike and son Chris of the home; her mother Georgia Primus of Waynesville; one sister-in-law June Boskovick (George) of California and a host of aunts, uncles, nephews, niece, cousins and friends. She was preceded in death by her father Clyde Primus. Services were held at 3:00 p.m. Friday, September 11, 2015 in the Deerlick Baptist Church of Waynesville with Bro. Gary Humphrey and Pastor Calvin Gladden officiating. The songs “The Dance” by Garth Brooks and “The Rose” by Conway Twitty were played and Becky Lercher sang “In the Garden”. Serving as escorts were Harvey Lynn Dye, Doug Black, Tony Dye, Ronnie Joe Dye, Walter Dye, Gary Dye, Adam Dye, Stephen Dye and Jon Dye. Burial followed in the Deerlick Cemetery of Waynesville. Memorial contributions may be made in memory of Diann George and may be left at the funeral home.

Elsie Diann George was born March 13, 1948 in Waynesville, Missouri. She was raised by her parents, Georgia and Clyde Primus as they traveled the world compliments of the United States Army. They lived in Alaska, Kansas, Germany and the last... View Obituary & Service Information

The family of Diann George created this Life Tributes page to make it easy to share your memories.