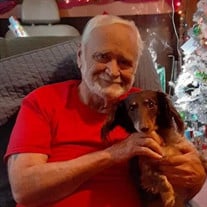 Donald Earl Boulware, son of the late Clyde and Bertha J. (Singleton) Boulware, was born May 3, 1950 in Crocker, Missouri where he grew up and graduated from high school. In 1971, Don entered the United States Air Force and served his country faithfully until his honorable discharge. On October 10, 2006, Don was united in marriage to Emma Lou Crump in Waynesville, Missouri. For most of his working years, Don worked as an excavator and did many jobs around Pulaski County. He also served as a dispatcher for the Dixon Police Department and as a detective for the Crocker Police Department and Pulaski County Sheriff’s Department. Don loved to tinker and fix things. He was also working on something and was a very good mechanic. He also loved to go fishing, but most of all, he loved spending time with his family. He wanted to make sure they were taken care of. Don also enjoyed spending time with friends at the Shrine Club. Don passed away Monday, June 6, 2022 in the Harry S. Truman Veterans Hospital of Columbia, Missouri having attained the age of 72 years. He will be sadly missed, but fondly remembered by all those that knew and loved him. Don leaves to cherish his memory his wife: Polly Boulware of Laquey, MO; four children: Mary Borden of Laquey, MO, Wes Borden of Laquey, MO, Desiree Smith (Chris) of Laquey, MO, and Sean Gilpatrick of St. Robert, MO; five grandchildren: Lestat Smith, Elias Smith, Embyr Smith, Jessica Borden, and Jacob Borden; two brothers: Bob Boulware (Rose Mary) of Crocker, MO and Wayne Boulware (Judy) of Crocker, MO; one sister: Evelin Boulware of Eldon, MO; other relatives, and friends. In addition to his parents, Don was preceded in death by two sisters: Mabel Carney and Marie Proctor; and three brothers: Larry Boulware, Melvin Boulware, and Clyde Boulware. Even though he is gone from our sight, Don’s love for family will live on in our hearts forever. A Celebration of Life gathering will be held beginning at 10:00 a.m. with military honors to be held at 12:00 p.m., Thursday, June 23, 2022 in the Waynesville City Park - Pavilion #2. Arrangements are under the direction of Memorial Chapels and Crematory of Waynesville / St. Robert. Memorial contributions may be made in memory of Donald Boulware and may be left at Memorial Chapels and Crematory of Waynesville / St. Robert.

Donald Earl Boulware, son of the late Clyde and Bertha J. (Singleton) Boulware, was born May 3, 1950 in Crocker, Missouri where he grew up and graduated from high school. In 1971, Don entered the United States Air Force and served his... View Obituary & Service Information

The family of Donald Earl Boulware created this Life Tributes page to make it easy to share your memories.