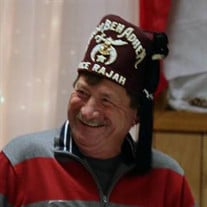 Donald Lee Cullison, son of the late Elmer Lee and Cherry Maxine (Lauderdale) Cullison, was born September 16, 1949 in Munich, Germany. Due to his father being in the military, Don and his family moved frequently, but mostly lived in Texas. From 1964 - 1966, Don lived in Pennsylvania and built pools. He then began working as a cable splicer for a contracting company that sent him to Missouri in 1966. In 1972, Don began working for United Telephone Company and retired in 2012. On April 13, 1973, Don was united in marriage to Susan Kay Williams in Waynesville, Missouri. They shared over 42 years of marriage together and were blessed with one son, J.T. In his spare time, Don enjoyed working with wood and distilling. He loved being outdoors; whether it was taking a canoe down the river with J.T., riding his Harley Davidson or going on the annual birthday float trip that the 42 boys gave him and his good friend Dan Deardorff. Don also enjoyed collecting knives. Don loved spending time with his family, especially playing with his grandkids. Don was a member of the Waynesville Masonic Lodge #375 AF & AM, the Scottish Rite and was Vice Rajah for the Pulaski County / Fort Leonard Wood Shrine Club. Don passed away Thursday, January 21, 2016 in the Cox Medical Center - South of Springfield, Missouri having attained the age of 66 years. He will be sadly missed by all those that knew and loved him. Don is survived by his wife: Susan Cullison of Waynesville, MO; one son: J.T. Cullison and wife Jill of O’Fallon, MO; three grandchildren: Luke, Ryan and Jack Cullison all of O’Fallon, MO; four siblings: Judy Gould of Kingsland, TX, Betty Carpenter and husband Jimmy of Burnett, TX, David Cullison of Kingsland, TX and Lou Binnion of the state of Texas; several nieces, nephews, other relatives and friends. In addition to his parents, Don was preceded in death by one brother: Gary Cullison. Services were held at 11:00 a.m. Tuesday, January 26, 2016 in the Memorial Chapels and Crematory of Waynesville / St. Robert with Rev. Danny Graves and Pastor Howard Malone officiating. The songs “That’s My Job” by Conway Twitty, “When I Get Where I’m Going” by Brad Paisley and “I Hope You Dance” by Lee Ann Womack were played. Serving as escorts were John Rosipal, Joe Curtman, Pat Shoemaker, Shawn Nickels, Jason Cullison and Lance Cullison. Serving as honorary escorts were Dan Deardorff, Ed Foote, David Cullison, Larry Lercher, Marvin Newell, Derrick Cullison and Deron Cullison. Burial followed in the Sunset Memorial Estates Cemetery of Waynesville. Memorial contributions may be made in memory of Don Cullison to the Shriner’s Hospital for Crippled Children and may be left at the funeral home.

Donald Lee Cullison, son of the late Elmer Lee and Cherry Maxine (Lauderdale) Cullison, was born September 16, 1949 in Munich, Germany. Due to his father being in the military, Don and his family moved frequently, but mostly lived in Texas.... View Obituary & Service Information

The family of Donald Lee Cullison created this Life Tributes page to make it easy to share your memories.