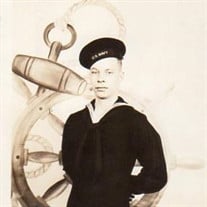 Donald Dean Hickey was born to Luther and Sophia (Barnet) Hickey in Dixon, Missouri on August 11, 1927. Donald’s mother died when he was only two. His father remarried and moved the family to St. Louis, Missouri however; Donald eventually went to live with his grandparents, Lennie and William Hickey in Maries County, Missouri near Wheeler Church. Donald was a World War II Veteran; and proudly served his country from 1944 until 1946 before his honorable discharge from the United States Navy. In 1960, Donald became a member of the Masonic Lodge; and also a member of the Sunnyside Lodge in Gardena, California. Donald met a beautiful young lady named Betty Lou Lee, the two fell in love and were married on September 23, 1950, making their home in California for fifty years before moving to Richland, Missouri in 2006. Donald and Betty were blessed with four children, Sharon Louise, Rhonda Jean, Ronald Dean and Michael Lee, their home was always filled with lots of love, joy and laughter. Donald passed away the morning of March 26, 2016 in the Richland Care Center of Richland, Missouri, having attained the age of 88. He leaves behind to cherish his memory his loving wife of over 65 years, Betty of their home in Richland, MO; two sons: Ronald Hickey of Dana Point, CA and Michael of Orange, CA; one grandson: Sean Michael Hickey of Dana Point, CA; two granddaughters: Lauren Danielle Hickey of Dana Point, CA and Savannah Chanel Hickey of Orange, CA; one sister: Theora McClain of Lewisville, TX; one nephew: David Burns of Canton, TX; one niece: Donna Vaughn of Lewisville, TX; other relatives and friends. Donald is preceded in death by his beloved grandparents, parents, two daughters, Rhonda (1963) and Sharon (2010). Donald was a loved man and will live forever in the hearts of those who knew and loved him. A memorial service was held at 12:00 noon, Wednesday, March 30, 2016 in the Wheeler Church of Christ Church with Pastor Ron Davy officiating. Interment with Military Honors followed in the Wheeler Cemetery near Dixon, Missouri. Arrangements were under the direction of Memorial Chapel of Richland. Memorial contributions may be made in memory of Donald Dean Hickey to the Wheeler Cemetery Fund and may be left at the church or the Memorial Chapel of Richland funeral home. Online condolences may be made at www.memorialchapelsandcrematory.com

Donald Dean Hickey was born to Luther and Sophia (Barnet) Hickey in Dixon, Missouri on August 11, 1927. Donald&#8217;s mother died when he was only two. His father remarried and moved the family to St. Louis, Missouri however; Donald eventually... View Obituary & Service Information

The family of Donald Dean Hickey created this Life Tributes page to make it easy to share your memories.