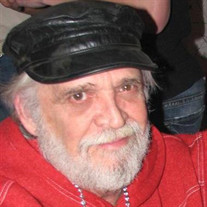 Donald Warren Williams, son of the late Warren Harding and Eva Lee (Griffin) Williams was born December 31, 1947 in Waynesville, Missouri and passed away on June 30, 2019 in Richland, Missouri having attained the age of 71. “Porky” as he was known by, grew up and graduated from Richland High School in 1965. In the fall of 1967, Porky enlisted in the United States Navy and proudly served his country until his honorable discharge in 1973. For his faithful service, he earned several awards and commendations, such as the National Defense Service Medal, Republic of Vietnam Campaign Medal, Meritorious Unit Commendation Medal, Combat Action Ribbon, and the Vietnam Service Medal with 2 Bronze Stars. Porky returned home to his tight knit little community of Richland where he chose to remain and raise his family. He started working for Zenith in Springfield, Missouri, then went on to a Civil Service position at Ft. Leonard Wood, before ending up at Copeland in Lebanon; retiring in 2010. Porky made a profession of faith when he was young and became a member of Grace Baptist Church. He greatly enjoyed riding his Sling Shot and motorcycle, collecting guns, and being outdoors, hunting or fishing. He also enjoyed going to the American Legion Post 240 and visiting with friends and neighbors. Porky was always looking for a good time. He is preceded in death by his parents and one sister, Barbara Williams. Porky is survived by his children: Amanda Gregory (Randall), Michael Williams (Sarah) all of Richland, MO and Shawn Williams of Springfield, MO, Staci Ray (Dennis) formerly of Waynesville, MO; 8 grandchildren: Johnathan, Abbigale and Clayton Gregory, Delanie and Davin Williams, Brandon, Camryn and Dana Long; his two brothers: Robert Williams (Joyce) of Rolla, MO and Charlie Williams (Ellen) of Springfield, MO; several nieces, nephews, and other relatives and friends. A celebration of life service was held at 4:00 p.m., Saturday, August 10, 2019 in the American Legion Post 240 of Richland, Missouri. Arrangements were under the care and direction of Memorial Chapel of Richland, Missouri.

Donald Warren Williams, son of the late Warren Harding and Eva Lee (Griffin) Williams was born December 31, 1947 in Waynesville, Missouri and passed away on June 30, 2019 in Richland, Missouri having attained the age of 71. &#8220;Porky&#8221;... View Obituary & Service Information

The family of Donald "Porky" Warren Williams created this Life Tributes page to make it easy to share your memories.