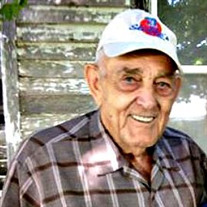 Donald Stubbe, one of thirteen children born to the late Engelkes and Dena (Hartema) Stubbe on June 15, 1927, in Robertson, Iowa, where he attended school until the eighth grade. In 1947 Donald joined the United States Air Force, proudly serving his country for two years, until he was honorably discharged in 1949. Donald met, and married the love of his life, Bessie Joyce Wever on December 4, 1948 in Loomis, California where the young couple made their home for nearly fifty seven years; and were blessed with two precious children, Judy and Donald. Donald worked at Elder’s Tire Company, and also as a maintenance mechanic for the Formica Company for many years. Donald was a former member of the Eagle’s Lodge in California. Donald and Bessie moved to Richland in 2005, where they enjoyed the small town atmosphere. In his younger years, Donald liked to fish. He loved his family, especially his grandchildren; they were his treasures in life. He loved God’s gifts of children and greatly enjoyed having them around to fill his life with laughter. Donald quietly passed away on the morning of Wednesday, August 20, 2014, in his home surrounded by his loving family, having attained the age of 87 years. He will be sadly missed by all those who knew and loved him, but his memory will remain in their hearts forever. Donald is survived by his wife, Bessie Stubbe, of the home; two children: Judy (William) Belden of Waynesville, MO and Donald William Stubbe of Roseville, CA; 6 grandchildren: Laura (Jason) Lobland, Julie (Ron) Day and Mel (Leah) Weller all of Richland, MO, Abigail Stubbe and Bessie Stubbe both of Roseville, CA; 13 great-grandchildren and 2 great-great-grandchildren; numerous nieces, nephews, other relatives and friends. Donald was preceded in death by his parents, five brothers and seven sisters. Memorial contributions may be made in memory of Donald Stubbe with envelopes available at Memorial Chapel of Richland. Online condolences may be left at www.memorialchapelsandcrematory.com

Donald Stubbe, one of thirteen children born to the late Engelkes and Dena (Hartema) Stubbe on June 15, 1927, in Robertson, Iowa, where he attended school until the eighth grade. In 1947 Donald joined the United States Air Force, proudly serving... View Obituary & Service Information

The family of Donald Stubbe created this Life Tributes page to make it easy to share your memories.

Donald Stubbe, one of thirteen children born to the late Engelkes...