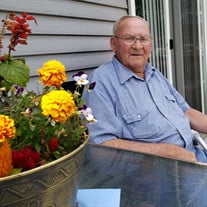 Donald Phil West, son of Jessie H. and Dettie Elizabeth (Hammers) West, was born November 22, 1927 in Camden County, Missouri, and entered into his heavenly home the morning of September 27, 2020, while in Lebanon North Nursing and Rehab in Lebanon, Missouri at the age of ninety-two years, ten months, and five days. Don, as he was known by, grew up in the High Point area, attending school at Brown School. He lived in Springfield, Missouri for twenty years, working at MFA before retiring in 1962. He moved back home to his High Point farm where he lived until 1979. After selling his farm, Don then settled into the small community of Richland, Missouri. He enjoyed being outdoors whether hunting, mowing his yard, stopping by the Warren Senior Center for lunch, or just hopping on the bus to go to the Casino’s. Don found joy in whatever he did, and wherever he went. However, spending time with family and friends meant the world to him. Don attended church at High Point near Montreal, Missouri for several years before he began attending church at Grace Baptist in Richland, Missouri. It was there he made a profession of faith following in baptism. Don’s warm smile, and handshakes were missed by his church family after he moved to Strafford, Missouri to be closer to his family. Don was preceded in death by his parents; two sisters, Cleo Rogers, and Lettie Martin; one brother, Adrian West; and his son, Bobby West. He is survived by his children, Tammy Joy (Gary) of Strafford, MO, Ronnie West of Tunas, MO, Susan Hall of Springfield, MO, Donna Kay Bishop (John) of Springfield, MO, 7 grandchildren; 14 great-grandchildren, and 2 great-great grandchildren; several cousins, nieces, nephews and other relatives and friends. Don was a simple man who enjoyed the simple things of this life. Although he is gone, he will not be forgotten by those who knew and loved him. We rejoice in knowing Don is safely home with his Lord. A graveside service was held at 10:30 a.m., Wednesday, September 30, 2020, in the High Point Cemetery near Montreal, Missouri with Pastor Danny Graves officiating. Family and friends served as escorts. Services were under the care and direction of Memorial Chapel of Richland. Thoughts about my Dad...Written by Tammy Joy Dad spent almost the last 4 years with me and my husband. What a Gift that was! He would tell me stories about my Grandma and Grandpa, things I never knew about them, and him. Dad would talk about us children a lot also. Even though Dad was 92 years old he loved living life to the fullest. He loved being around people, going to the Senior Centers, going with the Bank to the Casino. Dad loved sitting outside and if a neighbor would stop, I would hear him say, “Howdy!” I know he was happy about Donna Kay and John buying his Dad and Mom’s place. He would say, “I talked to Donna Kay this morning and they are going down to the country” his face would light up a little. He would ask if I had talked to our sister Susan and ask me if our brother Ronnie had got a deer this year. Dad would ask me about the Grandchildren a lot also. I know my Dad was ready to go to a much better and beautiful place, but he will be missed by all of us so very much! The one thing that I will miss the most besides him not being with us all, is him sitting at the kitchen table and looking outside telling me “Good Morning” every day. We love you Dad and will be thinking of you every day. Memorial contributions may be made in memory of Don West to left at the Memorial Chapel of Richland. Online condolences can be sent at www.memorialchapelsandcrematory.com.

Donald Phil West, son of Jessie H. and Dettie Elizabeth (Hammers) West, was born November 22, 1927 in Camden County, Missouri, and entered into his heavenly home the morning of September 27, 2020, while in Lebanon North Nursing and Rehab in... View Obituary & Service Information

The family of Donald Phil West created this Life Tributes page to make it easy to share your memories.