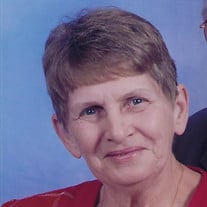 Donna Lea Lorene Shoemaker, daughter of the late James and Cora (Gan) Williams, was born August 16, 1937 in Waynesville, Missouri where she grew up and attended school. At the age of 17, Donna left Waynesville and went to Washington before moving to San Antonio, Texas where she lived for 17 years. While in Texas, Donna worked as an inspector for Holiday Inn and traveled to their different locations in Colorado, Texas and Oklahoma. She then moved to Lawton, Oklahoma and eventually moved back to Missouri in 1983. On July 10, 1972, Donna was united in marriage to Felton Shoemaker, Sr. and they shared over 30 years of marriage together before he preceded her in death in February 2002. After moving back to Waynesville, Donna owned and operated from 1983-1990, the Hungry House Café. She loved visiting with the different customers that would come in and formed some lifelong friendships with some of the regulars. Donna also worked at the B&B Theater for 12 years. In her spare time, Donna enjoyed being out in her yard while working in her vegetable and flower gardens. She was also talented with handwork, especially crocheting and embroidery work. She loved sharing her creations with family and friends. Donna was a life member of the DAV (Disabled American Veterans) Ladies Auxiliary. Donna loved her family tremendously and enjoyed spending as much time with them as she could. She especially loved being with her grandchildren and great grandchildren. Donna had made an important decision in her life and accepted Jesus Christ as her Savior. She was baptized and after moving back to Waynesville became a member of the First Free Will Baptist Church. She recently was attending Church of God in St. Robert until her health began to prohibit her from going. Donna went home to be with her Lord and be reunited with Felton on Wednesday, August 12, 2020 in her home having attained the age of 82 years. She will be sadly missed, but fondly remembered by all those who knew and loved her. She leaves to cherish her memory, three children: Felton Shoemaker, Jr. (Brianna) of Waynesville, MO, Donella Anderson (Arty) of Garland, TX and Timothy Landes (Dianna) of Pipe Creek, TX; seven grandchildren: April Anderson (Cody) of Fountain, CO, Breanna Shoemaker of Waynesville, MO, Jenna Stewart-Mills (Raea Mills) of Columbia, MO, Adrian Moore of Mesquite, TX, Timothy Landes, Jr. of Tulsa, OK, Heather Stratton (Dane) of Claremore, OK and Hannah Lucas of Fayetteville, AR; six great grandchildren: Drake Anderson, Maya Stewart, A’Meyra Moore, Jaden Harper, Ava Harper and Cameron Harper; two sisters: Arena Graves of Laquey, MO and Ella Rose of Canon City, CO; special friend: Norman Anderson of Waynesville, MO; severalnieces, nephews, other relatives and friends. In addition to her parents and husband, Donna was preceded in death by an infant son: Mark Jefferson Shoemaker; one sister: Aislea Bales; and two brothers: Kellis Lloyd Williams and James Floyd Williams. Funeral services were held at 10:00 a.m. Friday, August 14, 2020 in the Memorial Chapels and Crematory of Waynesville / St. Robert with Pastor Danny Graves and Pastor Ron Leggett officiating. The songs “In the Garden” and “Precious Lord, Take My Hand” were sung by Becky Lercher. The song “Red River Valley” was played. Serving as escorts were Larry Sisk, Arty Anderson, Roger Graves, Timothy Landes, Jr., Danny Graves and Scottie Timmons. Burial followed in the Deerlick Cemetery of Waynesville, Missouri. Memorial contributions may be made in memory of Donna Shoemaker and may be left at Memorial Chapels and Crematory of Waynesville / St. Robert.

Donna Lea Lorene Shoemaker, daughter of the late James and Cora (Gan) Williams, was born August 16, 1937 in Waynesville, Missouri where she grew up and attended school. At the age of 17, Donna left Waynesville and went to Washington before... View Obituary & Service Information

The family of Donna Lea Lorene Shoemaker created this Life Tributes page to make it easy to share your memories.