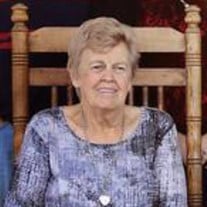 Donna Kay (Wrinkle) Smith, 66, of rural Richland, MO transitioned to the Church Triumphant December 16, 2014 after a year-long struggle with cancer. Donna was born August 10, 1948 near Hawkeye, MO, the daughter of Wilbur Wrinkle and Veta (Shelton) Wrinkle who preceded her in death. Donna graduated from Crocker High School as salutatorian in 1966 and was employed thereafter by Pulaski County Bank in Richland, MO. On March 20, 1970 at Sweet Home Christian Church, Crocker, MO she wed her sweetheart of 44 years, Gary Dean Smith of Aurora, MO, following his return from the Vietnam campaign, he survives. Of this union were born three children: Cathi, Brian and Aaron. Throughout her married life, Donna was a very devoted wife, mother and grandmother. She spent over 15 years as a stay-at-home mom, tending to the needs of her family. She also played the role of pastor’s wife; living in various parts of Missouri and in Shreveport, Louisiana. In 1989 she returned to work outside the home at the bank in Richland, MO. She retired from 24+ years of banking service in 2013 from Bank of America. Donna was an avid reader, a great writer with beautiful penmanship and a phenomenal cook. She also enjoyed gardening, decorating and traveling. Donna enjoyed her life on the family farm outside of Richland. Her greatest joy was spending time with her five grandchildren; Brianna, Ashley, Evan, Logan and Landon. Donna was a woman of faith, we celebrate her life and take comfort in knowing that she rests in the presence of Jesus Christ and will one day share in the glory of the resurrection and share eternity with those she so dearly loved on earth. She is survived by her loving husband Gary Smith of the home; three children: Cathi and her husband Robert Barth of Rolla, Missouri and their children, Ashley and Evan; Brian Smith of Crocker, Missouri and his daughter Brianna; Aaron Smith and his wife Heather of Richland, Missouri and their sons Logan and Landon; one brother Gary Wrinkle and his wife Jewell of Poulan, Georgia; loving in-laws and many nieces, nephews, other relatives and friends. A graveside service was held at 11:00 a.m., Friday, December 19, 2014, in the Pemberton-Thornsberry Cemetery near Richland, Missouri, with Pastor Wayne Smith officiating. Serving as escorts were Brian Smith, Aaron Smith, Steven Smith, Rob Barth, Ronnie Shelton and Michael Griffin. Services were under the direction of Memorial Chapel of Richland. Memorial contributions may be made in memory of Donna Smith for the Pemberton-Thornsberry Cemetery and may be left at the funeral home.

The family of Donna Kay Smith created this Life Tributes page to make it easy to share your memories.