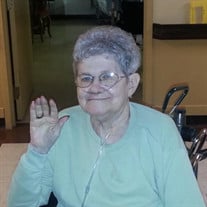 DDorene Faye Parrish Maxey, daughter of the late John and Mary Ethel (Boone) Collins, was born July 6, 1938 in Willow Springs, Missouri. As a small child, Dorene and her family moved to Crocker, Missouri where she attended school. On December 2, 1955, Dorene was united in marriage to Donnie Gene Parrish and to this union two sons were born, Bruce and John. They shared almost 21 years of marriage together before Donnie preceded Dorene in death on January 29, 1976. Dorene and Donnie made their home in Crocker and after his passing she continued to stay in Crocker. Dorene met and married Heber A. “Gus” Maxey and they shared several years together before he preceded her in death. During her working years, Dorene worked as a waitress in Waynesville and Crocker for a short time before beginning her employment on Fort Leonard Wood as a cashier. She was then employed at the Lodge of the Four Seasons as the head cashier and spent 15 years there until her retirement. After her retirement, Dorene was able to enjoy her time at home. She loved to watch and feed hummingbirds, and caring and tending her yard. Dorene loved her family dearly and enjoyed spending time with them, especially going to the Lake of the Ozarks. While there she loved to go crappie fishing. Dorene was a lifelong member of the Crocker Christian Church. Dorene went home to be with her Lord on Wednesday, November 1, 2017 in the Life Care Center of Waynesville having attained the age of 79 years, 3 months and 26 days. She will be sadly missed, but fondly remembered by all those that knew and loved her. Dorene leaves to cherish her memory her two sons, Bruce Parrish (Debbie) of Crocker, MO and John Parrish (Kathy) of Lebanon, MO; five grandchildren, Jamie York (Ted) of Lebanon, MO, Kelli Henson (Matt) of Lebanon, MO, Michelle Parrish of Kansas City, MO, Samantha Parrish of Waynesville, MO, and Lindsey Parrish of Crocker, MO; four great-grandchildren, Caleb and Carter York and Carsyn and Caysie Henson; her sister, Linda Layman (Leon) of Crocker, MO; a number of nieces and nephews; as well as a host of other relatives and friends. In addition to her parents and husbands, Dorene was preceded in death by one brother: Cecil Collins and two sisters: Helen Prescott and Chris Helms. Services were held at 3:00 p.m. Saturday, November 4, 2017 in the Crocker Christian Church of Crocker, Missouri with Pastor Larry Richardson officiating. Becky Lercher sang “In the Garden” and serving as escorts were Brian Layman, Henry Hauck, Andy Helms, Mike Smith, Greg Helms and Jimmy Moore. Burial followed in the Crocker City Cemetery of Crocker, Missouri. Services were under the direction of Memorial Chapels and Crematory of Waynesville / St. Robert. A memorial has been established to the Crocker Christian Church in memory of Dorene Maxey, and contributions may be left at the funeral home or at the church during visitation.

DDorene Faye Parrish Maxey, daughter of the late John and Mary Ethel (Boone) Collins, was born July 6, 1938 in Willow Springs, Missouri. As a small child, Dorene and her family moved to Crocker, Missouri where she attended school. On... View Obituary & Service Information

The family of Dorene Faye Parrish Maxey created this Life Tributes page to make it easy to share your memories.