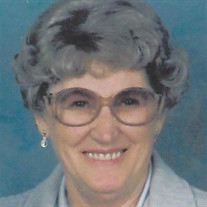 Doris May Rowden, daughter of the late Wesley and Malvina (Rowbottom) Moody, was born May 26, 1923 in the Oklahoma Territory. She passed away Tuesday, May 7, 2019 in the Richland Care Center of Richland, Missouri having attained the age of 95 years. Doris grew up in Tulsa, Oklahoma and graduated from Tulsa Central High School. After graduation, Doris served two tours of duty as a WAC. On April 21, 1953, Doris was united in marriage to Charles “Chuck” Milford Rowden in Sapulpa, Oklahoma. They shared over 62 years of marriage together and were blessed with two children: Wesley and Sharon. Doris helped her husband Chuck in a variety of business ventures, in both California and Missouri, including grocery stores, auto repair, real estate and meat processing. In her spare time, she liked to make dolls, quilting, needlepoint, watch old movies, and she really enjoyed reading. She was a member of the Order of the Eastern Star for many years. Most importantly, Doris loved her family and cherished the times that they could spend together. She will be sadly missed, but fondly remembered by all those who knew and loved her. Doris leaves to cherish her memory, two children: Wesley Rowden (Mary) of Willmar, MN and Sharon Gifford (Paul) of Laquey, MO; one sister: Julia Ann Murphy of Granite City, IL; two grandchildren: Shawna Gifford and husband Danny Seaton; and Kathryn Rowden; one great grandchild: Elizabeth Rowden-Harstad; a special niece, Donna Culwell of Tulsa, OK, and many other relatives and friends In addition to her parents, Doris was preceded in death by her husband, Charles M. Rowden (September 23, 2015); one sister: Patricia Culwell; and one brother: Richard Moody. Funeral services were held at 2:00 p.m. Friday, May 10, 2019 in the Memorial Chapels and Crematory of Waynesville / St. Robert with Pastor Robert Gifford and Pastor Danny Graves officiating. The songs “Amazing Grace (My Chains Are Gone)” and “How Great Thou Art” were played. Serving as escorts were Shawna Gifford, Danny Seaton, Kathryn Rowden, Sam Gifford, Steve Pool and Jim Mooney. Burial with military honors followed in the Fairview Cemetery of Laquey, Missouri. Military honors were provided by the Missouri Honors Team. Memorial contributions may be made in memory of Doris Rowden to the Fairview Cemetery Fund and may be left at the funeral home.

Doris May Rowden, daughter of the late Wesley and Malvina (Rowbottom) Moody, was born May 26, 1923 in the Oklahoma Territory. She passed away Tuesday, May 7, 2019 in the Richland Care Center of Richland, Missouri having attained the age of... View Obituary & Service Information

The family of Doris May Rowden created this Life Tributes page to make it easy to share your memories.

Doris May Rowden, daughter of the late Wesley and Malvina (Rowbottom)...