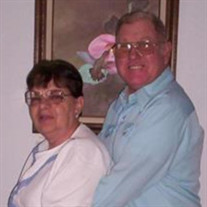 Dorothea May Grisham, daughter of the late Michael Joseph Pollreisz and Laura May Bell (VanNatta) Pollreisz, was born October 15, 1933, in Phillip, South Dakota and passed away May 1, 2020, in the Lake Regional Health Care System of Osage Beach, Missouri having attained the age of 86. Dorothea and her family left South Dakota, moved to Missouri for a few years where she attended Oak Dale and Elm Grove Elementary Schools, before moving back to South Dakota in 1945. Dorothea graduated in 1949 from South Dakota Public Schools in Plankinton, South Dakota, before moving to Oregon. While in Oregon she worked in a cannery near Stayton. After coming back to Missouri, Dorothea began working at HD Lee in Lebanon, then at the Richland plant off and on before it’s closing. She also cared for her mother and father during their final years, and after their deaths, she cleaned houses until retirement. She enjoyed quilting, gardening, woodworking, making doll houses for family, and later in life developed a love for word search puzzles. Dorothea met Robert Alvin Grisham and the two married on April 30, 1971, at the Trinity Lutheran Church of Lebanon, Missouri. They shared over 49 years of love and happiness before Dorothea’s passing. Bob’s heart broke when his loving wife passed. He continued down life’s journey until God called him home the morning of December 31, 2021, having attained the age of 82 years. Bob was the son of the late Coy Allen Grisham and Cora Mae (McFredrick) Grisham, and was born June 25, 1939, in Morrisville, Missouri, and passed away on December 31, 2021, while in the Richland Care Center of Richland, Missouri, having attained the age of 82. He played basketball during his high school years and graduated from Marion C. Early Senior High School on May 18, 1957. He served in the United States Army for four years and was a member of the Military Police. While stationed in White Sands, New Mexico, the military sent Bob out to help the ranchers round up their animals off the land so the military could use the land. After the service, Bob worked at Groendyke Ranch in Oklahoma as a cowboy for a few years. He later became a heavy equipment operator, working for Wyatt Excavating for forty-three years before retiring. He also helped Dorothea care for both his in-laws. Bob enjoyed training horses, farming, taking trips to California, Oregon, South Dakota, and Wisconsin to see family and friends. On weekends, Bob would travel across the country to shear sheep. In his spare time he enjoyed spending time with his neighbors. Bob and Dorothea both enjoyed being outdoors and spending time together. They loved their family and always looked forward to spending time with them. Bob and Dorothea were of the Catholic faith and have been members of both St. Jude’s Catholic Church of Richland, MO, and St. Anthony’s Catholic Church of Camdenton, Missouri. Dorothea was preceded in death by her parents, husband, Bob (2021), two infants, Larry, and Mary; five brothers, John, Mike, Joseph, Albert, and an infant Pollreisz; four sisters, Viola Pollrerisz, Mary Schutt, Ruby Smith, and Tina Condon; brothers-in-laws, Elmer Schutt, Vernon Rowden, Junior Condon, and Lloyd Smith, three sisters-in-laws, Lola Pollreisz, Judy Pollreisz, and Marikay Pollreisz. She is survived by three sisters: Violet Rowden of Richland, MO, Christine Thurin (Ralph) of Viroqua, WI, and Patricia Picard (Gary) of Richland, MO; one brother: George Pollreisz (Carolyn) of Columbia, MO; sister-in-law: Janet Pollreisz of Richland, MO; numerous nieces, nephews, and other relatives and friends. Bob was preceded in death by his parents, wife, Dorothea (2020), one sister, Janie Grisham, and one brother, Gerald Grisham. He is survived by his daughters, Roberta Sue of Las Vegas, NV, and Quenna Patrick of GA; six grandchildren, Nathan, Anthony, Josh, Krystal, Ben, and Savannah. Several great-grandchildren; sister-in-law: Alice Grisham of Morrisville, MO; several nieces, nephews, and other relatives and friends. Dorothea and Bob will be sadly missed, but fondly remembered by all those who knew and loved them. Services were held at 11:00 a.m., Saturday, January 8, 2022, in the Memorial Chapel of Richland with Father Michael Murphy and Pastor Charlie Newell officiating. Favorites song selections included, “Go Rest High on That Mountain, “ “Farther Along, ” “I’ll Fly Away,” and “Drinking from My Saucer.” Serving as escorts were Gary W. Picard, Michael Picard, Gary Picard, Nathan Sherman, Anthony Sherman, Josh Sherman, Ben Grisham, and W.T. Carnes. Inurnment will be held at a later date. Services were under the care and direction of Memorial Chapel of Richland. In lieu of flowers, memorial contributions may be made in memory of Dorothea May and Robert Alvin Grisham to either St. Jude’s Catholic Church of Richland, MO, or to the American Stroke Foundation and can be left at Memorial Chapel of Richland at your convenience. Online condolences may be left at www.richlandmemorialchapel.com

Dorothea May Grisham, daughter of the late Michael Joseph Pollreisz and Laura May Bell (VanNatta) Pollreisz, was born October 15, 1933, in Phillip, South Dakota and passed away May 1, 2020, in the Lake Regional Health Care System of Osage Beach,... View Obituary & Service Information

The family of Dorothea (Pollreisz) and Robert Grisham created this Life Tributes page to make it easy to share your memories.

Dorothea May Grisham, daughter of the late Michael Joseph Pollreisz...

Share and view memories of Dorothea (Pollreisz) and Robert...