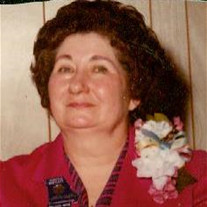 Dorothy Lee Bartlett, daughter of Alva Choate and Neva (Swearingen) Choate, was born November 25, 1927 in Kansas City, Missouri. Shortly after birth, Dorothy moved to Springfield, Missouri where she lived until 1943. Dorothy moved to the Waynesville area and graduated from Waynesville High School with the Class of 1945. During these growing up years, Dorothy was raised mostly by her grandparents and they held a special place in her heart, especially her grandfather, Henry Swearingen. Dorothy was united in marriage to Clayton Dale Bartlett and they shared two children: Jeffrey and Steve. Clayton preceded her in death on September 24, 1984 and Steve preceded her in death on April 10, 1994. Dorothy was able to stay at home and raise her family. She loved to sew and work with her flowers and shrubbery. She was an avid reader and was a great cook and baker. She was known for her famous chess pies made with English walnuts instead of pecans. Dorothy was very community minded and did a lot of volunteer work. She worked with the Extension Council, Oats Bus as scheduler and the Waynesville / St. Robert Senior Center. Dorothy had made a profession of faith in her early years and attended First Baptist Church of Waynesville for many years. Dorothy went home to be with her Lord Monday, March 16, 2015 in the Lebanon South Nursing and Rehab Center of Lebanon, Missouri having attained the age of 87 years. She will be sadly missed, but fondly remembered by all those that knew and loved her. Dorothy leaves to cherish her memory, her son: Jeffrey Bartlett of San Jose, CA; daughter: Karol Evans of Richland, MO; grandson: Steven Bartlett of Richland, MO; special 5 year old friend: Logan Smith; two nephews: Gary Long and wife Ina of Clinton, MO and Mike Long of Sedalia, MO; two nieces: Susie Devine and Debra McCutcheon, both of Manteca, CA; several cousins, other relatives and friends. In addition to her parents, husband and one son, Dorothy was preceded in death by one infant brother, Eugene Choate. Services were held at 1:00 p.m. Friday, March 20, 2015 in the Memorial Chapels and Crematory of Waynesville / St. Robert with Karol Evans and Rev. Christopher Hendrix officiating. The songs “How Great Thou Art” was sung by soloist Becky Lercher and the song “Go Rest High on that Mountain” was played. Serving as escorts were family and friends. Burial followed in the Waynesville Memorial Park Cemetery of Waynesville. Memorial contributions may be made in memory of Dorothy Bartlett to the Waynesville / St. Robert Senior Center and may be left at the funeral home.

The family of Dorothy Lee Bartlett created this Life Tributes page to make it easy to share your memories.