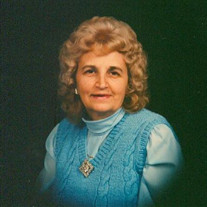 Dorothy “Maggie” Bonar, daughter of the late Wade M. and Thelma (Shrewbury) Laxton, was born March 7, 1934 in Matoaka, West Virginia where she grew up and attended school. On April 11, 1953, Maggie was united in marriage to Robert P. Bonar in Yuma, Arizona. They shared many wonderful years together before he preceded her in death. They were blessed with four children: Lauren, Patricia, Robert and Malinda. Maggie worked for 16 years for Dolly Madison in the bakery and as a serving maiden in Milwaukee and other places including Hollywood, California. Maggie and the family moved to the Waynesville / St. Robert area in March 1985 where she has remained the rest of her days. Maggie served as a volunteer for the Oats Bus, Old Stage Coach, Sunset Village and Good Samaritan of the Ozarks. She was Volunteer of the Year two times for Sunset Village of the Ozarks and one time for the Oats Bus. At an early age, Maggie made a profession of faith. She was currently a member of the Faith Baptist Church of Waynesville. Maggie loved God, her family and people in general. Maggie was known as a “trouble maker” because of playing jokes on people. She loved to give people a hard time in a friendly way, especially the police. She was well loved by everyone that knew and loved her. Maggie went home to be her Lord on Friday, April 15, 2016 in the Sunset Village of the Ozarks of St. Robert, Missouri having attained the age of 82 years. She will be sadly missed but fondly remembered by all those that knew and loved her. Maggie leaves to cherish her memory, three children: Lauren Bonar and wife Lynette of Tuba City, AZ, Patricia Goodrich of Waynesville, MO, and Robert Bonar and wife Tonya of Laquey, MO; one sister: Wanda Ashby and husband Ron of Princeton, WV; one brother: Ray Laxton and wife Jenette of Takoma, WA; fourteen grandchildren: Darrin, Lisa, Larry, Nicole, Justine, Ross, Cynthia, Christine, Andrew, Brandon, Kristen, Autumn, Cheyenne and Joshua; thirteen great grandchildren: Elijah, Tobin, Rafe, Zane, Zach, Braden, Violet, Max, Brady, Jade, Jessica, Alixandria and Colton; several nieces, nephews, other relatives and friends. In addition to her parents and husband, Maggie was preceded in death by her daughter, Malinda; six siblings: Edmond Laxton, Wade Laxton, Jr., John Laxton, Edith Crawford, Eula Keiner and Wilma Akers. Services were held at 10:00 a.m. Monday, April 18, 2016 in the Faith Baptist Church of Waynesville with Rev. Danny Graves and Chaplain Tom Ford officiating. Lauren Bonar spoke on behalf of the family. Soloist Carl Norman sang “The Lighthouse” and soloist Becky Lercher sang “Because He Lives” and “How Great Thou Art”. Serving as escorts were Larry Jensen, Ross Bonar, Andrew Anderson, Brandon Bonar, Joshua Bonar and Ricky Castro. Burial followed in the Waynesville Memorial Park Cemetery of Waynesville. Services were under the direction of Memorial Chapels and Crematory of Waynesville / St. Robert. Memorial contributions may be made in memory of Maggie Bonar and may be left at the funeral home.

Dorothy &#8220;Maggie&#8221; Bonar, daughter of the late Wade M. and Thelma (Shrewbury) Laxton, was born March 7, 1934 in Matoaka, West Virginia where she grew up and attended school. On April 11, 1953, Maggie was united in marriage to... View Obituary & Service Information

The family of Dorothy Maggie Bonar created this Life Tributes page to make it easy to share your memories.