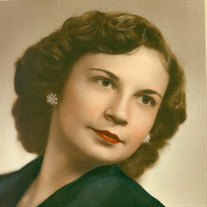 Dorothy Marie Leuthen, daughter of the late William E. and Anna Marie (Kresin) Lucas, born June 8, 1930 in Kansas City, Kansas. She was baptized in June 1930 at Emmanuel Lutheran Church in Kansas City and confirmed on April 18, 1943. Dorothy grew up in Turner, Kansas and graduated from Turner High School with the Class of 1948. After graduation, Dorothy went to business school in Kansas City, Missouri and worked in the billing department for Owens Corning Fiberglass. She also worked as a hostess at Gold Buffet in Kansas City, a popular place of many professional football athletes to have dinner. On October 13, 1951, Dorothy was united in marriage to James Joseph Leuthen, whom she had met on a blind date. They shared 50 years together and were blessed with four children: James Joseph, Jr., Michael, Cheryl and John. Dorothy and James moved to Waynesville in 1968 and she worked at Montgomery Wards in St. Robert for 17 years before joining the Arrow Mart in St. Robert and served as the manager at Arrow Mart in Camdenton before retiring in 1993. While living in Kansas City, Dorothy was a member of Hope Lutheran Church and after moving to Waynesville, she became a member of Faith Evangelical Lutheran Church of St. Robert. Dorothy and James retired to Pomme De Terre Lake and enjoyed spending time at the lake with their family and friends. Dorothy enjoyed cooking and working in her church, especially Vacation Bible School. Dorothy went home to be with her Lord Tuesday, June 20, 2017 in the Life Care Center of Waynesville, Missouri having attained the age of 87 years. She will be sadly missed, but fondly remembered by all those that knew and loved her. Dorothy leaves to cherish her memory, her three children: Michael Leuthen of Pittsburg, MO, Cheryl Teague of Waynesville and John Leuthen of Newburg, MO; two sisters: Darleen Heater of Spring Hills, KS and Helen Ruttinger of Shawnee Mission, KS; eight grandchildren: Jason, Joey, Jessica, Heather, Kevin, Cathi, Zane and Lela; many great grandchildren, nieces, nephews, other relatives and friends. In addition to her parents, Dorothy was preceded in death by her husband: James Joseph Leuthen, Sr.; and one son: James Joseph Leuthen, Jr. Services were held at 11:00 a.m. Monday, Jun 26, 2017 in the Faith Evangelical Lutheran Church of St. Robert, Missouri with Pastor John Perling officiating. The songs “I Know that My Redeemer Lives”, “Beautiful Savior”, “How Great Thou Art” and “In the Hour of Trial” were sung by the congregation accompanied by Kitty Scott. Serving as escorts were Jimmy Joe Leuthen, Joey Leuthen, Payne Leuthern, Jason Teague, Zane Keeling, and Christopher Giancola. Burial followed in the Waynesville Memorial Park Cemetery of Waynesville. Memorial contributions may be made in memory of Dorothy Leuthen to the Faith Lutheran Church and may be left at the funeral home.

The family of Dorothy Marie Leuthen created this Life Tributes page to make it easy to share your memories.