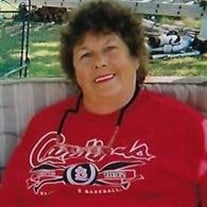 Dorothy Lee Roam daughter of Howard Harvey and Rosetta May (Salter) Maddox, Sr. was born April 18, 1934, in Rolla, Missouri. She attended school in Waynesville, Missouri, graduating in 1952. Dorothy married Lindell Roam on December 31, 1955, in Waynesville, Missouri. Shortly after they were married, the couple moved to St. Louis, Missouri where Lindell began his career with General Motors. After his retirement the family moved back, settling in the small community of Richland. Dorothy was devoted to her family. She always provided a warm and loving environment for her four children to thrive in while also working outside her home at the Rexall Drug Store in Waynesville. There, she enjoyed meeting and serving her patrons at the Soda Fountain. She was a die-hard St. Louis Cardinals fan whether listening to them on the radio or watching them on TV. Dorothy also enjoyed Lottery Scratcher Tickets, watching old westerns, going shopping, playing Bingo, cooking, especially for her kids and grand kids, and loved the holidays. Dorothy passed away with her loving family by her side on the evening of Wednesday, October 9, 2019 having attained the age of eighty- five. In addition to her parents, Dorothy was preceded in death by her son, Roy Lee Watson (1987). two brothers, Howard Harvey Maddox, Jr. and Harold David Maddox (2016). Dorothy leaves behind to cherish her memory Lindell Roam, her beloved husband of over sixty-three years of their home; 4 children, Debbie Hare of O’Fallon, MO, Kevin Roam (Trisha) of Dixon, MO, Karmel “Kim” Roam of Richland, MO, and Dean Roam (Angie) of Buffalo, MO; 12 grandchildren; 10 great-grandchildren; one brother, Daniel Maddox (Edwina) of Skiatook, OK; several nieces, nephews, and other relatives and friends. Having made a profession of faith, we can rejoice in knowing Dorothy is safely in the arms of her loving Lord. Her great sense of humor will be greatly missed; however, she will forever live on through the treasured memories made in the hearts of those who were privileged to know and love her. Services for Dorothy Roam were held at 2:00 p.m., Monday, October 14, 2019, in the Memorial Chapel of Richland with Pastor Mitch Henson officiating. Favorite recorded songs included, Vince Gill’s - “Go Rest High on that Mountain,” and Elvis Presley’s - “How Great Thou Art.” Jason, Ryan and Joshua Hare, Michael Pittman and Kevin and Dean Roam served as escorts. Burial followed in the Waynesville Memorial Park Cemetery, Waynesville, Missouri. Services were under the care and direction of Memorial Chapel of Richland. Memorial contributions may be made in memory of Dorothy Lee Roam and may be left at the Memorial Chapel of Richland. Online condolences may be left at www.memorialchapelsandcrematory.com

The family of Dorothy Lee Roam created this Life Tributes page to make it easy to share your memories.