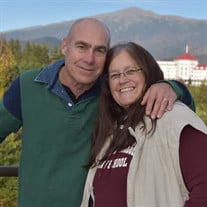 LTC (Ret) Earl Eugene Hooper, 61, of Waynesville, MO, passed away Monday, January 27, 2020 in the General Leonard Wood Army Community Hospital of Fort Leonard Wood, MO. Just the day before he had said that when his time came, he wanted the Lord to surprise him, and no one argues with Earl, apparently not even God. LTC (Ret) Hooper is survived by his wife: Deborah Hooper of the home; two children: Margaret Payne (Christian) of Chicago, IL and Michelle Hooper of St. Louis, MO; two sisters: Diane Pardue (Bill) of Crestview, FL and Judy Taylor (Ray) of the state of Kentucky; one brother: Mike Hooper (Vicki) of the state of Texas; several nieces, nephews, other relatives and friends. Earl grew up working construction with his dad and loved building and tinkering all his life. He went to college on an ROTC scholarship to study engineering before getting his Masters from Florida Institute of Technology in 1994. He met his wife of 33 years, Deborah, while stationed abroad and they were married in Hanau, Germany on July 18th 1986. Earl lived a big life, racing cars, jumping out of planes, and scuba diving in the ocean. He loved photography and filled his home with pictures. He was a lifelong learner and a story teller, whether it was homemade pyrotechnics in college that nearly set a building on fire, running the Marine Corps marathon twice and bonking hard both times, or getting so bored with a job assignment in the Army that he and a friend wrote a computer program to manage troop schedules, back when everything was still being done on paper - he was always ready to entertain and teach you something new. Earl served 20 years in the Army Corps of Engineers, leading the Terrain Visualization Center at Ft. Leonard Wood for several years up until his retirement. After he left the Army, Earl devoted much of his time to the church and children’s ministry. Whether it was AWANA, Vacation Bible School or a random Wednesday night, Earl was always there, finding the boys that most needed his guidance and support and doing everything he could to set them on the right path. His purpose in life was to serve God, help others and take care of his family. Earl was a devoted husband and an enthusiastic father. Not one to brag about himself, he never missed an opportunity to tell you how great his children were. Being a dad was one of the highlights of his life. Even though he admitted to “mellowing” in his later years, he never slowed down. When God called him home, he was training for a 5K in April and making plans for a trip to the mountains this summer with his wife and girls. Still, he was a man at peace with his life, and enjoying each day as a blessing. His legacy will ripple through all those he touched and the lives he impacted in his time on this earth. May we all live up to the example he set for us Services were held at 1:00 p.m. Monday, February 3, 2020 in the Memorial Chapels and Crematory of Waynesville / St. Robert with Pastor Harold Elson officiating. Inurnment with military honors followed in the Missouri Veterans Cemetery of Waynesville. Military honors were provided by the United States Army of Fort Leonard Wood, Missouri. Memorial contributions may be made in memory of LTC Earl Hooper to the Honey Springs Baptist Church of Brumley, MO and may be left at the funeral home.

LTC (Ret) Earl Eugene Hooper, 61, of Waynesville, MO, passed away Monday, January 27, 2020 in the General Leonard Wood Army Community Hospital of Fort Leonard Wood, MO. Just the day before he had said that when his time came, he wanted... View Obituary & Service Information

The family of LTC (Ret) Earl Eugene Hooper created this Life Tributes page to make it easy to share your memories.