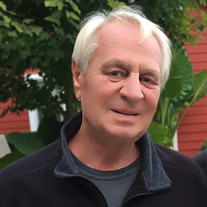 Earnst Leon Schuenemeyer, son of the late Walter Earnst and Mildred Lucille (Stubblefield) Schuenemeyer, was born November 21, 1941 in Jefferson City, Missouri. He passed away Monday, January 1, 2018 in the University of Missouri Hospital and Clinics of Columbia, Missouri having attained the age of 76 years, 1 month and 11 days. In addition to his parents, Leon was preceded in death by his brother-in-law, Inmon Dale Simpson. He grew up in Richland, graduating from Richland High School with the Class of 1959. Leon served in the United States Army from 1966 - 1968 before serving as President of Diversified Industries, of Independent Stave, Inc. of Lebanon for 30 years. Leon was united in marriage to Ramona Jean Harris on May 5, 1973 at the First Baptist Church of Richland. Leon leaves to cherish his memory his wife, Ramona of the home; his son, Lee Walter Schuenemeyer and wife, Carrie of Kansas City, MO; two grandsons, Eli Schuenemeyer of Springfield, MO and Breck Schuenemeyer of Kansas City, MO; his sister, Mary Louise Simpson of Lebanon, MO, and son, Mike and his wife, Becky, and their daughter, Gracie, all of Lebanon, MO; his mother-in-law, Mabel Phillips Harris of Lebanon, MO; a brother-in-law, Lynn Morrison Harris and wife, Jeanine of Lebanon, MO, with their children, Bailey Lowe of Kansas City, MO, and Brooke Bishop and husband, Ryan, and their children, Preslie and Harper all of Edina, MO; three sisters-in-law, Lyndele Sturgiss of Lebanon, MO, Carolyn “Susie” Harris of Lebanon, MO, and Charlotte Lister and husband, Terrill of Overland Park, KS, and their daughter, Sarah Venable, and her children, Alexis, Taylor, Hannah, and Jacob, all of Overland Park, KS; two very special Godchildren: Sherri Gikovate and husband Andre and their daughter Bella of Rio de Janeiro, Brazil, and Heather Lewis Anderson and her daughter Laila Sue of St. Louis, Missouri; as well as a host of other relatives and friends. Services were held at 1:00 p.m. Saturday, January 6, 2018 in the First Baptist Church of Richland under the direction of Memorial Chapel of Richland. Our family will honor Leon’s request and lay him to rest on our farm that has been in the Miller-Stubblefield-Schuenemeyer Families for over a hundred years, and a few years ago certified by the State of Missouri as a Missouri Century Farm. Memorial contributions in memory of Leon Schuenemeyer can be made to the Richland Alumni Association, Class of 1959, and contributions can be made in care of the funeral home.

The family of Earnst Leon Schuenemeyer created this Life Tributes page to make it easy to share your memories.