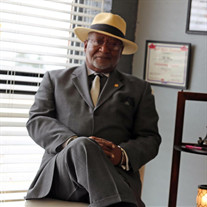 Eddie Boyd, son of the late Edward and Virginia (Dixon) Boyd, was born December 25, 1935 in West Helena, Arkansas where he grew up, graduated from high school and enjoyed family times with his brothers, Lanfrey, Herbert, Jack, Jill, Jesse and sister, Ruth. As a young boy, Eddie made a profession of faith and was baptized at the age of 13 at St. Mary’s #1 Church in Helena, Arkansas. At the age of 18, Eddie moved to Chicago, Illinois and spent the next sixty years in Chicago, where he attended and was ordained Deacon, under the late Rev. Willie Mason, at St. Michael’s M.B. Church. Later he joined Metropolitan M.B. Church and then Freedom Baptist Church under the pasturage of Rev. Craig Melvin Smith. Once he moved to the Waynesville, Missouri area, in 2014, he immediately joined St. Paul Miracle Temple, COGIC where his youngest daughter serves as his pastor. On June 24, 1966, Eddie was united in holy matrimony to Fredricka Hoover and they shared many wonderful years and memories together. They were blessed with six children: Christine, Joann, Willie, Monique, Stephanie and Bryant. Eddie had a number of careers which included working with his brothers at one of the families businesses, Centennial Cleaners, Bally Manufacturing Company and after retirement had the pleasure of working as a crossing guard for the Forest Park School District. In his spare time, Eddie enjoyed bowling, playing tennis, coaching basketball and sports in general. He had the gift of gab and could tell you stories that made you laugh. He was an excellent singer, wonderful cook and was best known for his homemade ice cream. Most importantly, he loved his family and loved spending time with them as much as he could. Eddie passed away Friday, September 21, 2018, in his home in Waynesville having attained the age of 82 years. Eddie leaves to cherish his memory, his wife, Fredricka; his six children, Christine Hall of West Helena, AR,(Lynndell), Joann Washington of Downers Grove, IL, Willie Boyd (Penny) of Berkeley, IL, Monique Prescott of Naperville, IL, Stephanie Bowens (Crosby) of Waynesville, MO and Bryant Boyd (Sally) of Waynesville, MO; sixteen grandchildren, eleven great-grandchildren; two great-great grandchildren; a sister, Ruth Graham of Chicago, IL; a brother, Jesse (J.B.) Boyd of Detroit, MI; a number of nieces and nephews; as well as a host of other relatives and friends. In addition to his parents, Eddie was preceded in death by one sister: Mary Boyd; and four brothers: Lanfrey, Herbert, Felton, and Melton Boyd (Jack & Jill). He will be sadly missed, but fondly remembered by all those who knew and loved him. Celebration of Life services were held at 3:00 p.m. Saturday, September 29, 2018 in the St. Paul Miracle Temple of St. Robert, Missouri. Services were under the direction of Memorial Chapels and Crematory of Waynesville / St. Robert.

Eddie Boyd, son of the late Edward and Virginia (Dixon) Boyd, was born December 25, 1935 in West Helena, Arkansas where he grew up, graduated from high school and enjoyed family times with his brothers, Lanfrey, Herbert, Jack, Jill, Jesse and... View Obituary & Service Information

The family of Eddie Boyd created this Life Tributes page to make it easy to share your memories.