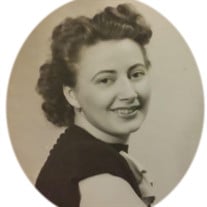 Edith L. McMillan, daughter of the late Ferdinand Drdla and Maria Havlik Drdla, was born January 2, 1927 in Vienna, Austria where she grew up and attended school. She also finished two years of college while in Vienna. In 1948, Edith met a United States soldier while he was serving as an honor guard in Vienna. They were married on October 26, 1950 in Salfelden, Austria and were blessed with 65 years of marriage together and three children: William, Peggy and Eric. William preceded her in death on February 24, 2016. In 1954, Edith and William came to the United States and lived in various military bases (Georgia, Kansas, Germany and Colorado) and eventually came to Fort Leonard Wood in 1964 where William retired. After moving to the Fort Leonard Wood area, Edith began working for EDP on post and served in that capacity for 30 years before retiring. Edith loved visiting with the soldiers that came through the mess halls and would always make them feel right at home. In her spare time, Edith enjoyed reading and listening to music. Her greatest joy was her family and she loved spending time with them and providing for them. She especially loved the times spent with her grandchildren. Edith passed away Thursday, May 5, 2016 in her home having attained the age of 89 years. She will be sadly missed, but fondly remembered by all those that knew and loved her. Edith leaves to cherish her memory, three children: William R. McMillan III (Marie) of Mount Laural, NJ, Peggy D Armbruster (Paul) of St. Louis, MO and Eric W. McMillan (Jackie West) of Springfield, MO; one brother: Kurt Drdla (Silvia) of Vienna, Austria; one sister: Edeltraude Gravdal (Leif) of Goeteborg, Sweden; sister-in-law: Helga Drdla of Vienna, Austria; brother-in-law: Tom McMillan of the state of Georgia; four grandchildren: Bonnie Rose Armbruster, Melissa and Chris Glassey, Robert W. McMillan and Eric T. McMillan; two great grandchildren: Summer and Kayla Glassey; niece: Tanja Braeuer of Austria; nephew: Tim McMillan; other relatives and friends. In addition to her parents and husband, Edith was preceded in death by one brother: Ernest Drdla. Funeral services were held at 12:15 p.m. Wednesday, May 11, 2016 in the Memorial Chapels of Waynesville with Chaplain Keith Ferrell officiating. Edith’s son-in-law, Paul Armbruster, recalled his wonderful memories of Edith and the recorded song “It Is Well With My Soul” was played. Inurnment followed at 1:00 p.m. in the Missouri Veterans Cemetery of Waynesville. In lieu of flowers, memorial contributions may be made in memory of Edith McMillan to the St. Jude’s Children’s Hospital and may be left at the funeral home.

Edith L. McMillan, daughter of the late Ferdinand Drdla and Maria Havlik Drdla, was born January 2, 1927 in Vienna, Austria where she grew up and attended school. She also finished two years of college while in Vienna. In 1948, Edith... View Obituary & Service Information

The family of Edith L. McMillan created this Life Tributes page to make it easy to share your memories.