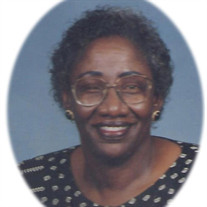 Edna Mae McFadden, daughter of the late Clarence and Florida Mae (Everett) Brown, was born August 18, 1943 in Panama City, Florida. She went home to be with her Lord on Thursday, January 10, 2019 in the Missouri Veterans Home of Cameron, Missouri having attained the age of seventy five years, four months and twenty-three days. Edna graduated from Roulhac High School in Chipley, Florida with the Class of 1961 and was the valedictorian of her class. After graduation, Edna entered the United States Army and served her country faithfully. While in the military, she met another young soldier at Fort Leonard Wood by the name of Alvin Curtis McFadden. They began dating and married on August 2, 1962 in Waynesville, Missouri. Edna and Alvin were blessed with two sons, Alvin and Marc. After her honorable discharge, Edna and the family stayed in the Waynesville / St. Robert / Fort Leonard Wood area where she raised her family. Edna worked hard to help provide for her family. She worked for thirty-one years at Fort Leonard Wood as a military pay technician and retired on March 29, 1997. In her spare time, Edna enjoyed reading and cooking. She was very involved in her community and church. She helped form the local NAACP chapter and also Greater Community Missionary Baptist Church on Hwy Y. She was a member of the First Baptist Church of St. Robert and was willing to help anyway that she could. Edna loved her family tremendously. She was always looking for ways to make their time together special and looked forward to spending time with them every chance she could. Due to her health, Edna moved closer to her son three years ago. According to her children, Edna was the strongest person they have ever met. She had a kind heart and a strong hand. Brutally honest but very giving and charitable! Mean spirited but had a good sense of humor. She was a problem solver who could always find the right answers for everything and could pinch a penny until it screamed. Edna leaves to cherish her memory, her two sons: Alvin McFadden of Kansas City, MO and Marc McFadden of Belton, MO; one sister: Lola Mae Woodson of Chipley, FL; one brother: Billy Coleman of Chipley, FL; six grandchildren; three great grandchildren; several nieces, nephews, other relatives and friends. In addition to her parents, Edna was preceded in death by her husband, Alvin McFadden; and one brother, Jared Kent. Funeral services were held at 12:00 p.m. Saturday, January 19, 2019 in the First Baptist Church of St. Robert, Missouri with Pastor Terrance Golden officiating. Several friends recalled their wonderful memories of Ms. Edna. Music was provided by Cassie Allen and serving as escorts were family and friends. Burial with military honors followed in the Waynesville Memorial Park Cemetery. Military honors were provided by the Missouri Honors Team. Services were under the direction of Memorial Chapels and Crematory of Waynesville / St. Robert. Memorial contributions may be made in memory of Edna McFadden and may be left at the funeral home.

Edna Mae McFadden, daughter of the late Clarence and Florida Mae (Everett) Brown, was born August 18, 1943 in Panama City, Florida. She went home to be with her Lord on Thursday, January 10, 2019 in the Missouri Veterans Home of Cameron, Missouri... View Obituary & Service Information

The family of Edna Mae McFadden created this Life Tributes page to make it easy to share your memories.

Edna Mae McFadden, daughter of the late Clarence and Florida...