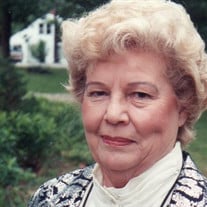 Edna Brock Wommack, daughter of the late Durand and Flora (Wrinkle) Brock, was born February 19, 1921, and adopted on January 19, 1922; she grew up and attended school in Richland, Missouri graduating from High School there in 1939. Edna later attended SMSU; now MSU for two years. While there she was named the “Ozarko” beauty queen and received a wonderful write up in the newspaper. She was not only beautiful, but highly intelligent and gracious. She truly was a “glamour girl.” On September 4, 1942, in Richland, Missouri, Edna, or “Oree” as she was known, married the love of her life, Sidney Jackson Wommack. Together they shared nearly 61 years of marriage before his passing on April 12, 2003 and were blessed with three children, Sandra, Cynthia and Brock. Jack and Oree spent summers at their ocean home in Madison, Connecticut with great joy. During the WWII years the family moved to St. Louis, Missouri, living there for five years before moving on to New Haven, Connecticut from 1950-2003; finally they made their way back home to the small tight knit community of Richland in 1986 where she still lived until her death on her beloved Brock farm. Oree made a profession of faith and was a member of the Richland United Methodist Church. Oree was an avid reader, having an infinite vocabulary and was very knowledgeable. She was a huge St. Louis Cardinal fan and greatly enjoyed watching them play. Oree was a classy lady with a beautiful smile that could light up a room. She had a sense of humor with a bit of sass, mixed in with a little orneriness, however, she enjoyed life. She is preceded in death by her parents, beloved husband, Jack, daughter, Sandra W. Stone and one brother, David Brock. On Sunday, November 6, 2017 while in the Richland Care Center, Richland, Missouri, Oree passed away, having attained the age of 96 years, 8 months, and 15 days. She leaves behind to cherish her memory one daughter, Cynthia Wommack of Punta Gorda, Florida, one son, Brock Wommack of Richland, MO; 2 grandchildren: James Cook of LaBelle, Florida and Elizabeth Monnot of Ft. Myers, Florida; 2 great-grandchildren: Mae Schmidt and Finley Monnot; her nieces and nephews, Susan Dodds, Kevin Brock, Michael Wommack, Mark Wommack and Janel Wommack; several other relatives and friends. Today, we choose to celebrate Oree’s life, a life well lived...Until we meet again. A Celebration of Life service was held at 10:00 a.m., Saturday, November 11, 2017 in the Richland United Methodist Church, Richland, Missouri with Rev. Mitch Henson officiating. Brock Wommack shared several wonderful memories of his mother, as did other family and friends. Rosalynn York accompanied song leader, Merlene Smith as she led the congregation as they sang “He Leaded Me,” “In the Garden,” and “Precious Lord Take My Hand.” Services were under the direction of Memorial Chapel of Richland. Memorial contributions may be made in memory of Edna “Oree” Brock Wommack to the Richland High School Art Department and may be mailed to the Memorial Chapel, 717 E. Jefferson Ave., Richland, Missouri 65556. Online condolences may be made at www.memorialchapelsandcrematory.com

Edna Brock Wommack, daughter of the late Durand and Flora (Wrinkle) Brock, was born February 19, 1921, and adopted on January 19, 1922; she grew up and attended school in Richland, Missouri graduating from High School there in 1939. Edna... View Obituary & Service Information

The family of Edna Brock "Oree" Wommack created this Life Tributes page to make it easy to share your memories.