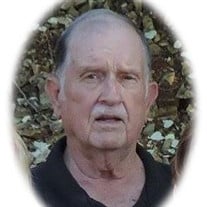 Edward D. Black, son of the late Samuel and Lucinda (Lane) Black, was born February 27, 1936 in Eagle Creek, Illinois. As a young boy, Ed grew up near Harrisburg, Illinois where he attended school. Ed moved to the St. Louis area and began working for National Foods as a meat cutter. During his time at National Foods, a certain young woman caught his attention by the name of Mary Lee Martin who worked in the pharmacy of National Foods. They began dating and were united in marriage on April 10, 1971 in St. Charles, Missouri. Upon on their marriage they shared seven children: Deborah, Pamela, Teresa, Rita, Angela, Douglas and David. Ed was always proud of the fact that all the kids were as one. Shortly after Ed and Mary were married, they moved to the Licking, Missouri area and owned and operated the B&E Meat Processing Plant. In 1972, they decided to expand the business and opened up a place in Waynesville. After selling the meat processing plant, they opened up Black’s Market on Hwy 7 and operate it to this day. In his spare time, Ed liked to keep up his yard and you could find him mowing quite a bit. He loved to tinker on just about anything. He also enjoyed reading his Bible and watching a Bible study on television. His greatest joy was spending time with his family, especially the grandchildren. He loved his family dearly and looked for every opportunity to spend time with them. Ed passed away Wednesday, September 20, 2017 in the Phelps County Regional Medical Center of Rolla, Missouri having attained the age of 81 years, 6 months and 22 days. He will be sadly missed, but fondly remembered by all those that knew and loved him. Ed leaves to cherish his memory his loving wife: Mary Black of Richland, MO; five daughters: Deborah Kane and husband Michael of Harrisburg, PA, Pamela Love and husband Robert of Thompsonville, IL, Teresa Barnes of Woodriver, IL, Rita Rucker and husband Brian of St. Peters, MO and Angela Price and husband Steve of St. Peters, MO; two sons: Douglas Black and wife Elizabeth of Waynesville, MO and David Black of Richland, MO; 14 grandchildren; several great grandchildren, great-great grandchildren, nieces, nephews, other relatives and friends. In addition to his parents, Ed was preceded in death by two sisters: Ruby and Mary; three brothers: Donald, Esdon and Floyd; father-in-law: Harold Graddy; and son-in-law: Jack Barnes. Services were held at 2:00 p.m. Monday, September 25, 2017 in the Memorial Chapels and Crematory of Waynesville / St. Robert with Pastor Chris Hendrix officiating. The songs “Raindrops Keep Falling on My Head” and “Wherever You Will Go” were played. Serving as escorts were Steve Price, Steven Price, David Black, Bob Love, Doug Black and Zachary Black. Serving as honorary escorts were Mic Kane, Shane Brown, Lester Ricketts and Tyler Barnes. Burial followed in the Waynesville Memorial Park Cemetery of Waynesville, Missouri.

Edward D. Black, son of the late Samuel and Lucinda (Lane) Black, was born February 27, 1936 in Eagle Creek, Illinois. As a young boy, Ed grew up near Harrisburg, Illinois where he attended school. Ed moved to the St. Louis area and began... View Obituary & Service Information

The family of Edward D. Black created this Life Tributes page to make it easy to share your memories.