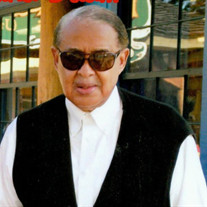 Edward H. Clyburn, son of the late Edward Hiawatha Clyburn, Sr. and Gladys Virginia (Hampton) Clyburn, was born August 19, 1936 in Englewood, New Jersey where he grew up and graduated from high school. Shortly after graduating from high school, Edward entered the United States Army and served his country faithfully for over 12 years to include the Reserves until his honorable discharge in 1981. After his discharge, Edward continued serving his country as a Civil Service employee and worked as an Alcohol and Drug Control Officer for 31 years. On May 10, 1960, Edward was united in marriage to Linda Dean Davidson in Atlantic City, New Jersey. They shared over 57 years of marriage together and were blessed with four children: Sheryl, Stephan, Michael and Terry. As a young man, Edward had made a profession of faith and after coming to the Fort Leonard Wood area, he and his family began attending First Baptist Church of St. Robert where he served as Chairman of the Deacon Board for 20 years. He also served as a Gideon Bible representative for a time. In his spare time, Edward enjoyed reading, playing the piano and was an avid collector of antiques, stamps and coins. Most importantly, he loved spending time with his family and was very proud of each and every one of them. Edward went home to be with his Lord, Wednesday, August 23, 2017 in the University of Missouri Hospital and Clinics of Columbia, Missouri having attained the age of 81 years. He will be greatly missed, but fondly remembered by all those that knew and loved him. Edward leaves to cherish his memory, his wife, Linda Clyburn of the home; four children: Sheryl Woodard of St. Robert, MO, Stephan Clyburn (Anne) of Philadelphia, PA, Michael Clyburn of Waynesville, MO and Terry Clyburn (Stefanie) of Washington, D.C.; four grandchildren: Nikki Allyn Woodard, Brandon Jared Woodard, Jalen Cassidy Clyburn and Ariel Connery Clyburn; two great grandchildren: Brooklyn and Braylon Woodard; two sisters: Yvonne Holgerson and Kim, both of the state of Massachusetts; numerous nieces, nephews, other relatives and friends. Services were held at 12:00 p.m. Saturday, August 26, 2017 in the First Baptist Church of St. Robert, Missouri with Pastor Bill Dudley officiating. Soloist Cassie Allen provided the music. Services were under the direction of Memorial Chapels and Crematory of Waynesville / St. Robert. Memorial contributions may be made in memory of Edward Clyburn and be left at the funeral home.

The family of Edward H. Clyburn Jr. created this Life Tributes page to make it easy to share your memories.