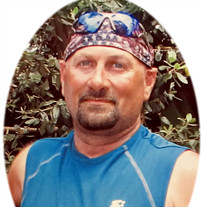 Edward Eugene “Ed” Neal, son of the late William H. and Wilma (Covert) Neal, was born December 14, 1960 in Des Moines, Iowa. During most of his growing up years, Ed lived in Ottumwa, Iowa and graduated from high school. Shortly after graduation, Ed entered the United States Army and served his country for 12 years before his honorable discharge. During that time, he was stationed at Fort Leonard Wood during his Basic training and AIT courses. On December 15, 1984, Ed was united in marriage to Barbara Ann Milligan in Ft. Riley, Kansas. They shared over 32 years of marriage together and were blessed with two sons: Shawn and Stephen. After Ed’s discharge from the military, he and the family remained in the Waynesville / Fort Leonard Wood area. He worked for a time as a guard at the Jefferson City and Licking facilities before becoming employed on Fort Leonard Wood as a crane operator. He loved his job and being back at Fort Leonard Wood. In his spare time, Ed loved to be outdoors; whether it was hunting, fishing or taking a ride on his motorcycle. He was an avid Alabama sports fan and was a member of the Patriot Guard Riders and helped with the Youth Wrestling Club. Ed was voted Coach of the Year by Missouri USA Wrestling and was inducted into the Missouri Wrestling Hall of Fame. Most importantly, he loved his family and spending time with them and his friends. Ed passed away Thursday, January 19, 2017, in his home in Richland, Missouri having attained the age of 56 years. He will be sadly missed but fondly remembered by all those that knew and loved him. Ed leaves to mourn his passing, his wife, Barbara of the home; two sons, Shawn Neal (Teresa) of Richland, MO, and Stephen Neal of Everett, WA; six grandchildren, Jerry Gowen, Jr., Jazzmyn Neal, Xavier Neal, Logan Nolan, Sheila Nolan, and Skylar Neal; Uncle, Ron Covert; Cousins, Susan Covert of Crocker, MO, Becky and Charlie Covert and their two children of Richmond, MO; his father-in-law and mother-in-law, Norman and Barbara Milligan of Taylor, MI; two sisters-in-law, Debbie Milligan and Loretta Eagle (Lenny) all of Taylor, MI; a brother-in-law, Dale Milligan (Tina) of Saginaw, MI; a number of nieces and nephews; as well as a host of other relatives and friends. Services were held at 12:30 p.m. Thursday, January 26, 2017 in the Memorial Chapel of Richland with Pastor Mitch Henson officiating. Serving as escorts were Roy Wildrick, Desmond Walker, Jack Ulrey, Dan McGowen, Francisco Mendez and Rocky Gascon. Burial with military honors followed in the Missouri Veterans Cemetery of Waynesville. Military honors were provided by the United States Army of Fort Leonard Wood, Missouri. Memorial contributions may be made in memory of Ed Neal and may be left at the funeral home.

Edward Eugene &#8220;Ed&#8221; Neal, son of the late William H. and Wilma (Covert) Neal, was born December 14, 1960 in Des Moines, Iowa. During most of his growing up years, Ed lived in Ottumwa, Iowa and graduated from high school. Shortly... View Obituary & Service Information

The family of Edward "Ed" Eugene Neal created this Life Tributes page to make it easy to share your memories.